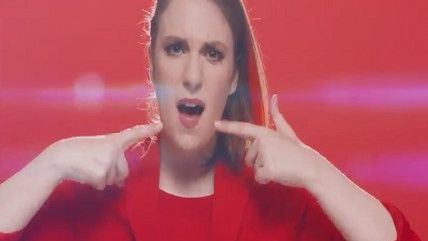 Lena Dunham, star and creator of the low-rated but relentlessly mused about HBO show Girls, has never been one to shy away from political activism or participating in electioneering for mainstream Democratic Party candidates.

In 2012, she released a viral video where she compared voting for Barack Obama to losing her virginity, and in 2014, she and rapper Lil' Jon co-headlined a Rock the Vote video that was most memorable for proving that talented people with a huge budget can still produce highly disposable content.

And though Dunham has publicly supported the students at her alma matter Oberlin College who feel that sushi served in the school cafeteria is an unacceptable form of "cultural appropriation," that didn't stop her from adopting the idioms of hip-hop culture for a glossy Funny or Die video to support "America's baddest grandmother…Hillary Rodham Clinton."

Near the end of the video, Dunham deploys her trademark move of pulling her pants off, which leads to radio personality Charlamgne Tha God gently tweaking her for both the appropriation of rap culture and her well-worn semi-nudity schtick, which at least displays some self-awareness and interjects some "comedy" into this otherwise overt campaign ad.

To be sure, there's nothing inherently wrong with cultural appropriation, that's how culture evolves, but it's annoyingly predictable for Dunham to give herself a pass considering her strict adherence to the rules of identity politics that inform much of her political activism.

On that point, earlier this week Dunham tweeted a bizarre and inane animated video where her father, artist Carroll Dunham, talks about the extinction of straight white men (is that happening?) as a good thing because they have been "screwing things up for long enough" and that it's time to "let some other people do it." I'm not here to defend the honor of straight white men, but…huh?

Below you can experience the hilarity and edginess of a corporate-funded third party ad in support of a presidential candidate, which is thankfully still legal as a result of the Supreme Court's Citizens United ruling (which Clinton has relentlessly supported overturning because the original case was about a corporate-funded film that opposed her presidential candidacy):