James Slatic and his family are fighting to get back $100K that was seized nine months ago by the San Diego D.A. They haven't been charged with a crime. 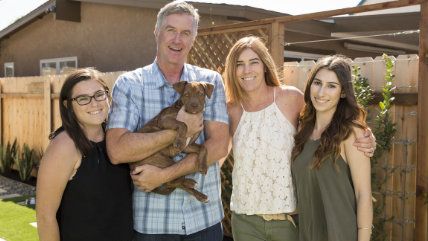 James Slatic, a California medical marijuana business owner, found out all his family's bank accounts had been seized by the government one day in January when his 19-year-old daughter tried to buy lunch at the San Jose State University cafeteria and her card was declined.

Slatic's wife tried to transfer money to their daughter, figuring she had simply overdrawn her account, as teenagers are wont to do, but her account wouldn't work, either. What the Slatics soon learned was the San Diego police had frozen all of their bank accounts: $55,258 from Slatic's personal checking and savings account; $34,175 from his wife Annette's account; and a combined $11,260 from the savings accounts of their two teenage daughters, Penny and Lily.

"Just imagine what it's like when you're a 57-year-old business man with three kids and a house, and supporting elderly parents, and all the sudden all your money is gone," Slatic says in an interview with Reason. "It's disappeared. Your car payment bounces, your insurance doesn't go through."

The Slatics' crimes? None. Or at least, the San Diego District Attorney's Office hasn't charged them with any in the nine months since it seized their accounts.

On Tuesday the Institute for Justice, a libertarian-leaning public interest law firm, filed a motion in California district court seeking the return of roughly $100,000 of the Slatic family's money. The Institute for Justice argues the seizure was a brazen and illegal use of civil asset forfeiture, a practice that allows police to seize property they suspect is connected to a crime. The owner often does not have to be convicted or even charged with a crime.

"I've not come across an abusive civil forfeiture this shocking," says Wesley Hottot, an attorney for the Institute for Justice. "We decided to become involved because his family's plight illustrates the power of civil forfeiture. Even when you've got rules in place, like in California, to protect property owners, police can still seize virtually everything you own based on one officer's suspicion."

Law enforcement groups say asset forfeiture is a vital tool to disrupt drug traffickers by cutting off their ill-gotten proceeds, but civil liberties groups argue the perverse profit incentives lead police to target everyday citizens, who then must prove their innocence to get their own property back.

The trouble for James Slatic began five days before his family's accounts were frozen, when around 30 San Diego police officers and DEA agents raided Slatic's medical marijuana business, Med-West Distribution, and seized nearly $325,000 in cash from a safe.

Slatic says he worked with the city to obtain all the necessary permits for his business, which refined marijuana oils for use in vaporizers and topical ointments. He is also politically involved in California's marijuana regulations and served on the boards of the Marijuana Policy Project and the California Cannabis Industry Association

"I had heard of [asset forfeiture] before but naively thought it was for people who don't pay their taxes or some other tawdry thing, not people who create jobs and pay taxes and are involved in the political process," Slatic says. "I didn't consider myself to be a potential target, but I was wrong."

The raid was a crushing blow to Slatic—not to mention his 35 employees, who lost their jobs and benefits without notice—but he never thought the police would go after his family's money as well. Slatic says they've been relying on help from family and friends, credit cards, as well as an online fundraising campaign, although that hasn't made much a dent in the roughly $70,000 in legal fees he's accrued so far.

The Institute for Justice argues there was no probable cause to raid Med-West. According to the warrant, law enforcement suspected Med-West was illegally producing hash oil and violating a California statute that bans the chemical extraction of controlled substances. The problem, Slatic and the Institute for Justice argue, is that Med-West only refined THC oil, not extracted it, using laboratory equipment—a far cry from a clandestine, combustible drug lab.

Likewise, the Institute for Justice says there is no traceable line between the alleged criminal activity and the personal bank accounts of Slatic's wife and daughter.

"You have to directly tie every dollar to a particularized allegation, and they've done none of that," Hottot said. "It's as if they think they have a blank check to take everything from a legal medical marijuana business owner's family. Even if we were to accept that the District Attorney has a legitimate investigation, they still don't have reason to take everything from this family and leave them nothing."

In a statement, a spokesperson for the San Diego District Attorney's Office says "the investigation related to this DEA task force raid is ongoing and the case remains under review for potential criminal charges."

"In addition, the primary mission of the asset forfeiture program is to enhance public safety by removing the proceeds of crime and other assets relied upon by criminals to perpetuate their criminal activity," the spokesperson continues. "When it comes to spending the funds, we're obligated to follow nationwide policies, procedures and guidelines set up by the Department of Justice."

Although the police were working as part of a Drug Enforcement Administration task force, federal prosecutors were blocked from going after Slatic by legislation, authored by California GOP Rep. Dana Rohrabacher, that restricts Justice Department funds from being used to prosecute people who are in compliance with state medical marijuana laws.

"Asset forfeiture is and of itself theft and is a crime against ordinary people by their own government," Rohrabacher says in an interview with Reason.

"My bill wouldn't cover what happened in San Diego unless it's dealing with a federal agency," Rohrabacher continued. "But the fact is in California people voted to make medical marijuana legal a long time ago. On the face of it, this seems to be contrary to the wishes of the people, and it's time that law enforcement wakes up and realizes they can't get away with this anymore."

Earlier this year, the California legislature also passed an asset forfeiture reform bill that requires a criminal conviction for prosecutors to seize under $40,000 from someone, which would have protected Slatic's wife and daughters from having their bank accounts frozen. The law goes into effect in January.

As it so happens, Slatic worked to get that legislation passed. He says the $40,000 cap was added to the bill at the last minute at the insistence of law enforcement groups, who said it was needed to preserve their abilities to go after cartels and large criminal organizations.

Now, even if the law applies retroactively, it won't protect Slatic.

"We either capped it or weren't going to get passage, so we took it," Slatic says. "It was better than nothing, but once again [law enforcement] kept their hand in the cookie jar. It has nothing to do with cartels, it just gave them the ability to go after bigger companies like mine."

California vote on a ballot initiative next week that would make recreational marijuana legal in the state.