Libertarian vice presidential nominee disagrees with his own campaign's statement on Clinton's emails, and calls her "a person of high moral character" 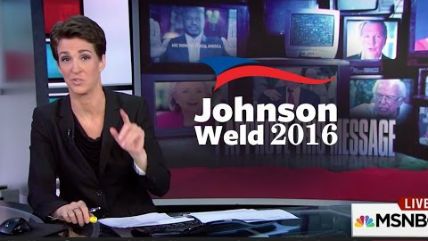 I am not making this up.

Weld, who one week ago took the unusual-for-a-third-party-candidate step of delivering a campaign statement and press conference urging Republicans to vote against Trump, went considerably further off the reservation today, not only in choosing an iconic progressive prime-time cable news program to call Clinton "a reliable person and an honest person," but in actively throwing his own campaign's statement about the FBI email investigation under the bus.

"It sounds like you do not agree with this statement from your own campaign," said Maddow, referencing Weld's prior comments in the interview that FBI Director James Comey's recent actions were "incomprehensible," because "there's nothing there."

"That's correct. That's correct," Weld said, adding that, "You know, in fairness, Gary and I have not agreed on a number of substantive issues in this campaign."

Watch the exchange below:

Governor Weld, critical of Comey's last-minute letter, does not agree with his running mate on this matter. https://t.co/xazmppMnjX

Maddow, smelling blood, mused that "The Libertarian Party hasn't treated you great if they're putting out statements that you disagree with under your own name….I can't imagine that your loyalty to them is stronger than your fear of Trump as a president," and asked Weld what he would really counsel voters in swing states to do. His response?

"Well, I'm here vouching for Mrs. Clinton, and I think it's high time somebody did. I'm doing it based on my personal experience with her, and I think that she deserves to have people vouch for her other than members of the Democratic National Committee." Watch it here:

Weld isn't throwing in the towel physically—he's got campaign events this week in Memphis, Kansas City, Providence, and Boston. But expending valuable time and energy on defending his running-mate's chief opponent one week before Election Day will likely be the final straw among Libertarians and libertarians who never trusted the former Massachusetts governor in the first place. He was supposed to bring media credibility, fundraising panache, and a path to 15 percent (let alone 5). But what he brought from his first main television appearance as an L.P. standard-bearer was the distinct impression, requiring constant walkback, that he was actively fond of his unlikable opponent, and in this race for himself. Plenty of libertarians wanted to wring his neck long before watching him smirk through sentences tonight such as, "I talk with Gary every other day; we're on different coasts, usually. But we keep in touch."

In a Facebook Live interview with Nick Gillespie at the Democratic National Convention this July, Weld was asked whether he would vote for Hillary Clinton. His answer, in part: "No, I'm a lifetime member of the Libertarian Party." It will be interesting to see whether that feeling will be mutual.

UPDATE: You can now watch the whole interview here.