Crooked Hillary is the one that has been on front pages lately. But none of us are either entirely evil or entirely good, including Clinton-and Donald Trump. 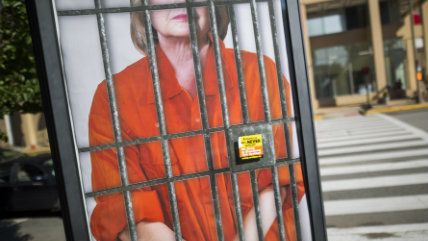 Forget about Donald Trump versus Hillary Clinton. The most interesting and consequential contest of the presidential campaign—and of the next four or eight years, if Clinton prevails in the election—may just be the one between Crooked Hillary and Saint Hillary.

Just in the past week, a Douglas Band memo exposed the overlap between the Clinton family charity and its for-profit business interests. The FBI director notified Congress that additional Hillary Clinton emails exist on a computer seized in an otherwise unrelated investigation of interstate sexting by former Congressman Anthony Weiner. And it emerged that the Clintons had failed to seek or obtain the building permits required for an extensive renovation on a house they acquired in Chappaqua, N.Y.

Crooked Hillary is the one that has been on front pages.

Give Trump credit for his ability to sense an opponent's vulnerability and encapsulate it in a memorable nickname. "Low energy Jeb." "Little Marco." And "Crooked Hillary."

She is, of course, a character that those of us who lived through the first Clinton presidency remember plenty well. The one who made $100,000 in ten months in 1978 and 1979 trading cattle and hog future contracts. The one whose Rose Law Firm billing records were mysteriously discovered in the White House residence in 1996 after two years in which they had disappeared while congressional investigators had subpoenaed them.

But if Crooked Hillary is in danger of losing the election, or of sabotaging her own chances of a successful presidency if she wins, it's Saint Hillary who is on the verge of winning a historic victory. If you are having a hard time dredging her image up from the depths of your memory, try clicking on the cover of The New York Times magazine from Sunday, May 23, 1993, which featured a striking image of Clinton dressed in pure, angelic, white, a three-strand pearl necklace around her throat.

The Times magazine cover promoted an article by Michael Kelly, who later became the editor of The New Republic and The Atlantic and who died in 2003 covering the Iraq War. Headlined "Saint Hillary," it was an attempt by one of our shrewdest journalists to take seriously the idea of Clinton as a thinker in the tradition of, say, Aristotle, or Leo Strauss, someone who believed in what the magazine's cover line called a "politics of virtue." Wrote Kelly: "She would like people to live in a way that more closely follows the Golden Rule. She would like to do good, on a grand scale, and she would like others to do good as well. She would like to make the world a better place—as she defines better."

The Times article went on, "She favors, as does the President, welfare reform, and she argues that society has extended too freely rights without responsibilities, which has led to a great decline in the standard of behavior. She cites a recent article by Daniel Patrick Moynihan on what the New York Senator called 'defining deviancy down.'"

Reported Kelly: "Mrs. Clinton argues that the concepts of liberalism and conservatism don't really mean anything anymore and that the politics of the New Age is moving beyond ideology." He concluded, "Returning to moral judgment as a basis for governmental policy must inevitably mean curtailing what have come to be regarded as sacrosanct rights and admitting a limit to tolerance."

There's a certain paradox, or at least irony, in Crooked Hillary and Saint Hillary coexisting in the same individual person. This wasn't entirely lost on Kelly, either—"a bit much…unintentionally hilarious," he mused. But ultimately he took Saint Hillary at her word, seriously.

It's easy to be put off by the combination of sleaze and self-righteousness, by the stark juxtaposition of Crooked Hillary and Saint Hillary. But people are more complex than caricatures. Few of us indeed are either entirely evil or entirely good. It's a point Clinton and her supporters might remember in assessing Trump. It's also a point that voters will have to consider as they look at that other name on the presidential ballot: not Crooked Hillary, not Saint Hillary, just Hillary Clinton, her complete complicated human self.