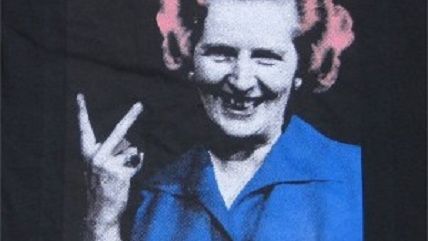 The Reason podcast is back and it's better than ever! Check out our latest offerings of high-quality, cutting-edge discussions of politics, culture, and ideas from a principled libertarian POV. We make no apologies, take no prisoners, and leave no sacred cow safe in making the case for a world of "Free Minds and Free Markets." Best of all, we have fun doing it.

Subscribe for free at iTunes, Soundcloud or via RSS—we deliver the goods however you prefer.

Here's "conservatarian" novelist Brad Thor, for instance, talking about his latest best-seller Scot Harvath thriller, Foreign Agent and explaining why he's #NeverTrump and #NeverHillary, hates the alt-right, and is totally certain that he's "gonna wake up on November 9th with most of the country and we're gonna have a shitty president either way."

Other recent podcasts have featured Libertarian Party presidential nominee Gary Johnson, spirited debates about Bob Dylan's politics and Nobel Prize, Instapundit Glenn Reynolds on getting suspended from Twitter, and Overstock CEO Patrick Byrne on the promise of bitcoin and blockchain technology to change the world.

Reason's mission is to bring a principled, persuasive, and attractive libertarian perspective to politics, culture, and ideas. We reach other folks in the media, policymakers, and business folks, providing better ways of thinking about government, defending innovation so it doesn't get strangled in regulatory red tape, and making the case for maximum freedom in all aspects of our lives. We're your voice in national debates and our award-winning reporting on everything from electoral politics to technological innovation to endlessly creative "experiments in living" helps to create the next generation of libertarians (I know encountering Reason in high school is why I'm a libertarian). We are champions of "Free Minds and Free Markets" and we're also constantly checking our own premises and working to revise, refine, sharpen, and help define what it means to be a libertarian.

So subscribe at iTunes, Soundcloud or via RSS and listen, watch, review, and rate!

Here's what new subscribers are saying about the Reason Podcast:

Never before have libertarian ideas and sensibilities been more widespread and influential—and never before have they been more needed to create a robust new operating system for a 21st century that is stuck in old, worn-out "binary choices" that make no sense in a world of inexhaustible possibilities.

Reason is hosting the conversation that susses out exactly what's wrong with contemporary politics and culture and how we can set them right by opening up everyone's possibilities to engage and influence the world around them. Here's one more taste of the podcast, this one featuring Reason magazine Editor in Chief Katherine Mangu-Ward, Weekly Standard writer Andrew Ferguson, and me talking about Trump vs. Hillary, why free speech defines American exceptionalism in many ways, and why Tom Wolfe is one goddamned great writer. Take a listen:

Don't miss a podcast! Subscribe at iTunes, Soundcloud or via RSS and listen, watch, review, and rate!