It's the campaign's own fault, but outlets are feeding the 'rigging' complaint. 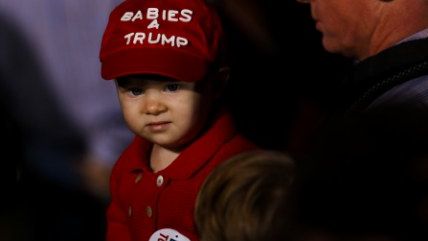 The basic idea presented in the headlines (Donald Trump is trying to prevent people from voting) is wholly inaccurate. But the inaccuracy is entirely the fault of the Trump campaign because that's the term an unidentified campaign official used when talking to a Bloomberg journalist. CNBC and Slate at least had the awareness to put the term in scare quotes because they realize it's not actual "vote suppression." (And the text of the stories beyond the headline actually explains the truth.)

What's actually happening is that the Trump campaign—in what appears to be pretty savvy operation (considering how outsiders perceive his candidacy as a populist insurgency that isn't terribly competent)—is putting together targeted social media advertisements to try to encourage certain Clinton-leaning demographics to reconsider whether she's worth their vote. They're not trying to "suppress" voters. They're trying to convince them not to vote.

The Facebook campaigns, explained to Bloomberg reporters Joshua Green and Sasha Issenberg, target Bernie Sanders supporters, women, and African-Americans, all very large blocs of voters Clinton needs in order to win. The campaign is doing its best to get information in front of these people that will remind them of the ways Clinton (and her husband) are not very good people. They report:

Trump's invocation at the debate of Clinton's WikiLeaks e-mails and support for the Trans-Pacific Partnership was designed to turn off Sanders supporters. The parade of women who say they were sexually assaulted by Bill Clinton and harassed or threatened by Hillary is meant to undermine her appeal to young women. And her 1996 suggestion that some African American males are "super predators" is the basis of a below-the-radar effort to discourage infrequent black voters from showing up at the polls—particularly in Florida.

On Oct. 24, Trump's team began placing spots on select African American radio stations. In San Antonio, a young staffer showed off a South Park-style animation he'd created of Clinton delivering the "super predator" line (using audio from her original 1996 sound bite), as cartoon text popped up around her: "Hillary Thinks African Americans are Super Predators." The animation will be delivered to certain African American voters through Facebook "dark posts"—nonpublic posts whose viewership the campaign controls so that, as Parscale puts it, "only the people we want to see it, see it." The aim is to depress Clinton's vote total. "We know because we've modeled this," says the official. "It will dramatically affect her ability to turn these people out."

The Trump team's effort to discourage young women by rolling out Clinton accusers and drive down black turnout in Miami's Little Haiti neighborhood with targeted messages about the Clinton Foundation's controversial operations in Haiti is an odd gambit. Campaigns spend millions on data science to understand their own potential supporters—to whom they're likely already credible messengers—but here Trump is speaking to his opponent's. Furthermore, there's no scientific basis for thinking this ploy will convince these voters to stay home. It could just as easily end up motivating them.

Based on polling, Trump is going to have to convince a lot of African-American voters and women to stay home. It should be very clear that this is not what "voter suppression" means, but because a Trump campaign worker used the phrase to describe it, that gives some media outlets clearance to be literal ("they said it, not us!") and suggest there's an especially sinister bend to what is in reality simply another iteration of extremely common negative political advertising.

Yes, fundamentally the blame is on Trump's campaign for its poor choice of words, but it is yet another example of the media behaving deliberately dense and literal with what Trump (and supporters) are saying or doing. And then we wonder why these same people hold the media in such poor esteem. There are real fears out there of attempts to intimidate voters on Election Day (another good reason people should just mail in their ballots and we can get rid of this silly smugness-inducing public ceremony of voting). But that's not what this is about. These headlines will ultimately feed the narrative that the media is "rigged" against Trump.