The Great Halloween Clown Purge of 2016 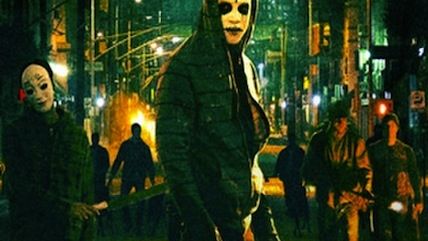 Halloween's urban legends have a habit of absorbing other urban legends, so I'm not surprised to see a rumor going around about a Halloween Clown Purge:

See all those shares? Halloween + clowns + The Purge = social-media catnip. But look at the bright side: This isn't anywhere near as popular as last year's big rumor, the "Halloween Revolt."

Remember the Halloween Revolt? Some anarchist militia that no one had heard of before was supposedly going to spend the night of October 31 luring cops into ambushes and killing them. Chunks of the media just ran with the story, treating it as a bona fide threat rather than a revamped gang-initiation urban legend mashed up with the resurgent fear of a war on cops. (Some versions of the story managed to work in a reference to The Purge too. The fear that young people are getting ready to reenact the violence of the Purge pictures is getting to be a perennial panic, and not just at Halloween; one such rumor even shaped police behavior right before the 2015 Baltimore riot.)

But while reporters have rushed to cover all kinds of clown rumors this year, sometimes leaving their common sense behind in the process, the clown-purge story has barely penetrated the mainstream media. Almost all of the outlets covering it are super-clickbaity sites in the more remote corners of the media ecosystem.

The cops have been quiet, too. Snopes notes that in previous "'purge' scares, local police typically weighed in to either pledge a close watch or debunk the rumors. Yet in this case, we've turned up no such assurances or debunkings from any law enforcement sources." Snopes' search appears to be out of date: Police in Greenville, South Carolina—ground zero for the current clown scare—have now told the public that the Clown Purge isn't a credible threat. But even that sort of skeptical statement remains rare. I certainly haven't seen any sign that documents like this are circulating:

Why the difference? Who knows? Maybe a cop-killing anarcho-militia felt like a more urgent threat. Maybe the idea of a Clown Purge was so silly that even the 11:00 news was wary about covering it. Maybe the press is getting sick of clowns.

Or maybe this year, when it comes to scaring people, Halloween just can't get out of the shadow of Election Day.