Preschoolers Not Allowed to Play on Swings with Grass Underneath: Still Too Dangerous 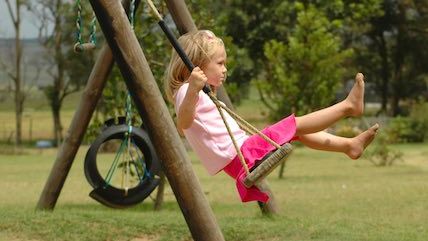 It is better for pre-schoolers not to play on their new playground equipment at all—equipment resting on grass and dirt, not concrete—than to let them play without 6 inch-deep mulch underneath, according to regulations.

A pre-school in a disadvantaged neighborhood of Charlotte, North Carolina, received the equipment as a donation, which seemed like a gift from heaven. But then it learned that it must keep the kids off the equipment until somehow the school gets a donation of $1,100, which is what the mulch will cost.

As Mark Price at the Charlotte Observer writes:

"The kids can't play on it," says Shannon McKnight, director of development for The Learning Collaborative. "It's a safety issue. It's required that you have a safety barrier surrounding anything that's a playground, which we can't afford yet."

The barrier she speaks of is not meant to be around the playground, but under it. Six inches of a special mulch is needed under the equipment, about 25 cubic feet.

This is the kind of regulation that makes you want to drag a bureaucrat out of the office to sit on the playground and watch exuberant little kids not playing.

While of course it makes sense to try to minimize injury, at some point our country has got to accept that zero risk, especially on a playground, is impossible. What's more, trying to achieve this unachievable goal (as we were discussing here yesterday) can actually backfire by, for instance, making kids less active. And less excited about school. Less joyous at recess. Less ready to learn. Less adept at assessing risk. Less resilient. Less ready for the world which is not carpeted in 6-inch-deep mulch.

The playground equipment is not resting on a bed of nails. It's on the ground, the same stuff kids have been raised on since the beginning of time. Some falls will happen and that's okay. Collectively, we have got to stop thinking of children only in terms of what could go wrong—worst-first thinking—and think about what goes right the vast majority of the time.

Otherwise, once some child breaks a limb despite the 6-inch-deep mulch, a new law named for that kid will require a depth of 8 inches, or 12 inches, or a bed of swan's down.

Not that I want to give the bureaucrats any ideas.