Drake did not agree to Trump's advances said lawyer Gloria Allred on Saturday. 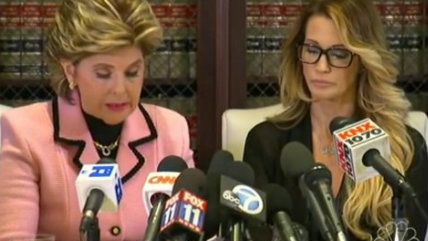 (photo of NBC News via @JeffreyGuterman/Twitter)

Adult-film star and sex educator Jessica Drake is the latest woman to accuse Donald Trump of moving on her sexually without consent. At a live Los Angeles press-conference Saturday with lawyer Gloria Allred, Drake accused the Republican presidential nominee of "uncontrollable misogyny, entitlement, and being a sexual assault apologist," and claimed he kissed her and two other women without their consent upon meeting them in 2006. Drake also said Trump offered to pay her for sex.

According to Drake, she and the other women were invited by Trump back to his Lake Tahoe hotel suite after meeting him at a golf tournament. Once there, Trump allegedly grabbed each of them tightly and kissed them. Later, a Trump representative called and invited Drake back to the suite alone, she said, but she declined—after which Trump personally called to extend the invitation. "What do you want? How much?" Trump allegedly said before offering her $10,000, which she rejected.

Drake's accusations add to the growing chorus of women from Trump's past now accusing him of kissing, grabbing, and groping them against their will. What's novel here is the allegation that Trump solicited sex for cash.