Clinton's False Assurances About Her Respect for the Second Amendment

The Democratic nominee says "there's an individual right to arms" but does not think it includes handgun ownership or self-defense in the home. 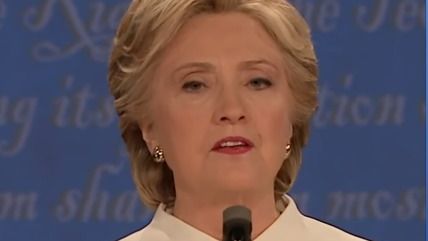 "There's no doubt that I respect the Second Amendment," Hillary Clinton said during last night's presidential debate. "I also believe there's an individual right to bear arms." That's as close as Clinton has come during this campaign to acknowledging that the Second Amendment protects an individual right to arms—a question she conspicuously dodged in an ABC News interview last June. Last night she once again showed why, notwithstanding her assurances, there is ample reason to doubt her respect for that right.

As debate moderator Chris Wallace noted, Clinton last year declared that "the Supreme Court is wrong on the Second Amendment." Last May one of Clinton's advisers said the candidate believes District of Columbia v. Heller, the 2008 case in which the Court first explicitly recognized the right to armed self-defense that Clinton claims to respect, "was wrongly decided." Last night Clinton said her problem with Heller is that the Court overturned a "reasonable regulation" aimed at protecting little children from gun accidents. "I disagreed with the way the Court applied the Second Amendment in that case," she said, "because what the District of Columbia was trying to do was to protect toddlers from guns, and so they wanted people with guns to safely store them."

Clinton neglected to mention that this so-called safe storage law 1) banned ownership of handguns, which as the Court noted are "the most popular weapon chosen by Americans for self-defense in the home" and 2) required that long guns in the home be kept unloaded and either disassembled or disabled by a trigger lock at all times, making it impossible to legally use them for self-defense. If that law did not violate the Second Amendment, it is hard to imagine what law would. Yet to Clinton it is a "reasonable regulation" perfectly consistent with the right to keep and bear arms.

Taking Clinton at her word, she believes "there's an individual right to arms," but it does not include the right to own a handgun or the right to use a rifle or shotgun for self-defense in the home, which the Court recognized as a "core lawful purpose" under the Second Amendment. What does the right Clinton has in mind include? She won't say, and this year's Democratic platform unhelpfully refers to "the rights of responsible gun owners" without providing any clue as to what those might be or so much as mentioning the constitutional basis for them.

"I support the Second Amendment," Clinton said last night. "I lived in Arkansas for 18 wonderful years. I represented upstate New York. I understand and respect the tradition of gun ownership. It goes back to the founding of our country." Yet she seems to have no idea why.