The case founders on its extravagant definition of negligent entrustment. 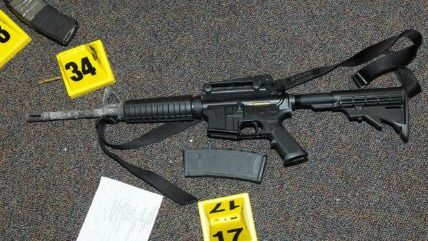 Last Friday a state judge dismissed a lawsuit against the manufacturer, distributor, and dealer who supplied the rifle used in the 2012 massacre at Sandy Hook Elementary School in Newtown, Connecticut. Superior Court Judge Barbara Bellis ruled that the lawsuit, which was brought by the families of nine people murdered at the school, plus a survivor of the attack, is precluded by the Protection of Lawful Commerce in Arms Act (PLCAA), a federal law that protects gun makers and dealers from liability for criminal use of their products. Bellis rejected the plaintiffs' argument that the defendants' distribution of the Bushmaster XM15-E2S to the general population amounted to "negligent entrustment," an exception to the shield created by PLCAA.

Under Connecticut common law, Bellis notes in her 54-page decision, negligent entrustment can be proven only by showing that the defendant knew or should have known that the person to whom he transferred a potentially dangerous item was apt to use it in a way that posed a risk to others. That did not happen in this case, since the perpetrator of the Sandy Hook massacre, Adam Lanza, took the rifle from his mother, who legally purchased it from a Connecticut gun dealer. Neither the retailer, the distributor, nor the manufacturer had any reason to know how the rifle would ultimately be used by Lanza.

The plaintiffs urged Bellis to accept a much broader understanding of negligent entrustment, arguing that it occurs when businesses sell military-style rifles to civilian buyers, knowing that some of those weapons will be used to commit violent crimes. According to the lawsuit, "assult weapons" like the Bushmaster XM15-E2S are not appropriate for the civilian market, so the general population constitutes a class of entrustees prone to dangerously misuse these products. Bellis did not buy it:

The court does not agree with the plaintiffs' assertion that the common law recognizes a class as broad as civilians to support a claim of negligent entrustment….

The plaintiffs allege that the defendants' entrustment of the firearm to respective entrustees was negligent because the defendants could each foresee the firearm ending up in the hands of members of an incompetent class in a dangerous environment. The validity of this argument rests on labeling as a misuse the sale of a legal product to a population that is lawfully entitled to purchase such a product….To extend the theory of negligent entrustment to the class of nonmilitary, nonpolice civilians—the general public—would imply that the general public lacks the ordinary prudence necessary to handle an object that Congress regards as appropriate for sale to the general public. This the court is unwilling to do.

Bellis notes that PLCAA's definition of negligent entrustment, which determines the extent of the law's exception, is narrower than Connecticut's. The federal law defines negligent entrustment as "the supplying of a qualified product by a seller for use by another person when the seller knows, or reasonably should know, the person to whom the product is supplied is likely to, and does, use the product in a manner involving unreasonable risk of physical injury to the person or others." That definition, Bellis concludes based on the text and history of the law, applies only to direct transfers of guns to people who misuse them. Hence even if a negligent entrustment claim were valid under state law in this case, it would not be valid under federal law.

In addition to their negligent entrustment claim, the plaintiffs argued that their suit is permitted under a PLCAA exception for gun sellers who violate state law. Bellis rejected their argument that sale of the Bushmaster XM15-E2S violated the Connecticut Unfair Trade Practices Act, concluding that the law requires a commercial relationship between plaintiff and defendant.

Joshua Koskoff, the plaintiffs' attorney, says he will appeal Bellis's decision, but it seems unlikely that his extravagant definition of negligent entrustment will find a more receptive audience in higher courts. No doubt critics of PLCAA such as Hillary Clinton will cite the difficulty of pursuing such claims as further evidence that the law undermines justice. Yet there is no justice in holding gun sellers responsible for crimes they have no way of preventing, except by going out of business altogether.