Independent conservative surges far ahead of the Libertarian and tantalizingly close to the lead. 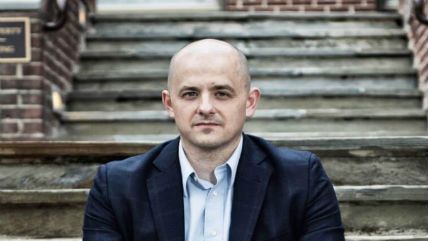 Evan McMullin, as reported in this space, had two great poll results last week in his home state of Utah—22 percent and 20 percent, respectively, while Libertarian Party nominee Gary Johnson, whose campaign is also headquartered in the Beehive State, was at 14 percent and 9 percent. The weekend brought a third good local poll result for the previously obscure former CIA agent and Goldman Sachs investment banker, from CBS/YouGov, which had him tied with Hillary Clinton for second place at 20 percent; far behind Donald Trump's 37, though ahead of Johnson's 7.

Then this morning saw the release of a new poll taken over the weekend by PPP Rasmussen Reports, as reported by Heat Street:* (See correction below.)

That is a remarkable surge for McMullin, and collapse for the guy he baits as not being a "real libertarian."

Even before digesting this latest poll, FiveThirtyEight had McMullin's chances of winning Utah almost even with Hillary Clinton's: 1.9 percent compared to 2.0 (Johnson was at 0.3). The site's pre-PPP projected vote share was Trump 41.2 percent, Clinton 27.2, McMullin 19.6, Johnson 9.8. (For reasons explained in this post, I think Nate Silver et al are overestimating Trump's support, though less so now that they're factoring in the #NeverTrumper.) UPDATE: FiveThirtyEight has updated; McMullin has now lapped Clinton in chances of winning, 5.2 percent to 3.2 percent (with Johnson down to 0.2); meanwhile, the overall picture is now Trump 38.9, Clinton 27.2, McMullin 22.6, and Johnson 9.1.

McMullin's competitiveness in Utah should give extra impetus to pollsters to include his name on presidential surveys, particularly in battleground states like Utah and Colorado, plus nearby states (such as Idaho and New Mexico) with heavy concentration of Mormon voters. As of right now, the only other of his 11 states in which he has appeared on polls is Virginia, where he has averaged two percent.

Below, watch Reason TV's recent video about why voters in reliably Republican Utah are running away from Donald Trump:

* CORRECTION: A previous version of this post made the very stupid error of attributing this poll to PPP instead of Rasmussen, and then further extrapolating an apples-to-apples comparison to a prior PPP poll. (Thanks to Torchiest for the catch.) Rasmussen had not previously polled Utah, so all four recent polls under discussion have no prior survey to compare to. Deep apologies for the error.