The U.S. Might Be About to Declare War on Canada Over Lumber

A trade war is brewing. 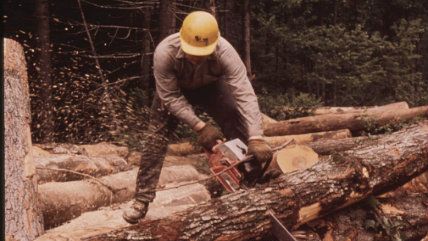 2016 has been an absolutely dismal year for the prospects of free trade, what with the two major party presidential candidates working to outdo each other on who can be the most protectionist. Last week things got even worse with news that a trade war is brewing between the United States and—wait for it—Canada.

On Wednesday the U.S. Lumber Coalition—which represents this country's timber industry—put out a press release saying that it had "no choice but to move to initiate trade cases against" Canada for the allegedly unfair practices of its logging industry.

These actions came on the heels of the expiration of the U.S.-Canada Softwood Lumber Agreement (SLA) on October 12. The SLA was signed back in 2006 as means of ending a decadeslong trade conflict between the United States and its northern neighbor over the supposed dumping of cheap Canadian lumber onto the U.S. market, to the detriment of American loggers.

The U.S. lumber industry's complaint centers around "stumping" fees Canadian provinces charge timber companies to log on publicly owned land. American loggers assert that these fees are too low and thus amount to an unfair subsidization of a domestic industry.

Since 1986, the U.S. Department of Commerce has tended to agree with American loggers, imposing trade duties that at times have reached as high 27 percent on Canadian imports.

But this has prompted counteraction from the Canadians, who have repeatedly dragged the U.S. before North American Free Trade Agreement (NAFTA) and World Trade Organization tribunals. Both bodies, in turn, have ruled multiple times against the U.S.'s protectionist actions. The most significant of these ruling came in March 2006 when a NAFTA panel ordered the U.S. to refund to Canada some $5 billion in import duties.

These international rebukes at last brought the U.S. to the table, and in July of that year, American and Canadian officials signed the landmark SLA. Under the terms of the deal, Canadian provinces would adopt a series of self-imposed duties and quotas designed to limit Canadian exports to at most 34 percent of the U.S. market. In exchange, the American timber industry agreed to drop its complaints over those notorious stumping fees.

For a blessed 10 years under this managed trade deal, relative peace prevailed, but with the expiration of the accord last week, that delicate calm looks like it's about to to shatter.

The result is likely to be higher prices for U.S. consumers, along with mill closures and job losses north of the border. And all this is happening under President Barack Obama, a man who at least pays lip service to free trade. It's hard to imagine the prospects for open lumber trade will get better under either of his likely successors.