Novelist Carl Hiaasen is so worked up over Hillary Clinton losing he mistook a parody for straight news. 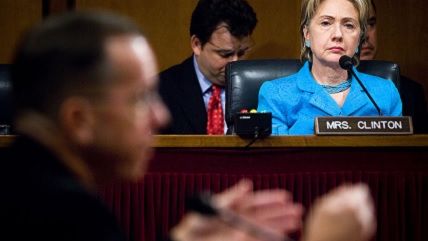 Florida former newsman and current novelist Carl Hiaasen has penned a heartfelt screed against voting for anyone other than a Republican or a Democrat for president (and if we're being totally honest, he only wants people to vote for Hillary Clinton). He's especially worried about Libertarian Gary Johnson because, well, Johnson is kind of popular. The idea of thousands of people voting Libertarian "would be much more amusing if Johnson were a non-factor in the election, and if the stakes weren't so high."

In fact, the fellow behind a long string of best-sellers (most recently Razor Girl) is so worried about Clinton possibly losing that Hiaasen mistook an Andy Borowitz humor column in The New Yorker for an actual account of Gary Johnson's favorite leaders. In its original published form, the column said that Johnson had named characters from Star Wars and Lord of the Rings as inspirations for his foreign policy.

Editor's note: This column originally referred to Libertarian presidential candidate Gary Johnson's comments on Obi-Wan Kenobi and Frodo. Those comments were part of a satirical column by Andy Borowitz in The New Yorker, and Johnson never made them.

Hiaasen feels your pain, dear voter, even if he can't quite wrap his mind around the idea that there are people out there who are not simply registering protest by voting for third parties. Me, for instance: I'm not "flipping off the establishment" by voting for Johnson. I'm actively pulling the lever for the candidate who comes closest to expressing my politics.

Every four years, lots of fed-up Americans cast their ballots for fringe candidates whom they know can't possibly win. This is a freedom we own—the right to willfully waste a responsibility that most people in the world only dream of obtaining.

This year, when the two major U.S. parties have nominated candidates disliked by so many voters, there's a strong temptation to turn to someone else—practically anyone else.

Perhaps you feel you'd be serving your conscience by voting for any other name on the ballot besides Trump or Clinton. Maybe you imagine waking up the next day proud of yourself for figuratively flipping off the establishment.

Give Hiaasen credit for magical thinking, though, especially in passages such as this one:

Lots of people thought the same thing back in 2000. That's the year Florida botched the presidential balloting, and George W. Bush was declared the official winner here by a measly 537 votes over Al Gore.

That's what sent Bush to the White House.

And that's why Arlington National Cemetery now has so many graves in a place called Section 60, where military casualties of the Iraq war are buried.

Let's ignore for the moment that Al Gore, a sitting vice president who totally blew his election campaign through a mix of strategic blunders and longstanding policy problems, lost a race he should have won easily. Recall that George W. Bush wasn't just considered a lightweight with relatively little experience, but that Gore was deemed a regular Wile E. Coyote super-genius when it came to wonkery, seriousness, and character. And let's also ignore that Gore's attitudes toward regime change in Iraq (which he supported as veep) are far from clear. No, just consider this: Hiaasen is willing to blame Florida for the Bush victory and thus the Iraq War—and then tell you that you should vote for Hillary Clinton, who actually voted for the Iraq War.

But come on, the real threat in 2016 is voting for the one candidate, Gary Johnson, who could theoretically win a state or two and has outlined a non-interventionist foreign policy:

The math from the 2000 fiasco is simple. If only 538 of the 138,000 Floridians who threw away their votes on no-chance, third-party candidates had chosen Gore instead, he would have won the presidency.

And Section 60 in Arlington wouldn't have so many graves.

Read whole thing here. And then vote your conscience, not somebody else's.