High rents have been a problem a lot longer then Airbnb has existed. 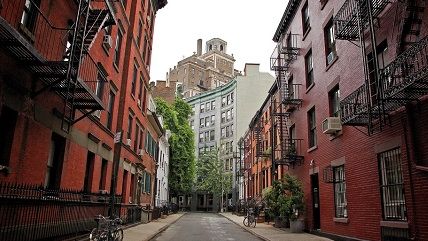 New York City Mayor Bill de Blasio touts his commitment to improving New Yorkers' access to affordable housing. His new plan, dubbed the most aggressive in the nation, requires developers building in certain areas to set aside a portion of units that will be available below market price for lower-income residents.

The mayor's desire to take action is warranted, as New Yorkers spend nearly two-thirds of their income on housing. While de Blasio has identified a real problem, his preferred solutions will not work. His commitment to failed policies and rejection of new solutions will only exacerbate the housing crises.

One example of this misguided approach is de Blasio's promise to spend $10 million on enforcement of a 2010 amendment to the city's Multiple Dwelling Law that bans short-term rentals on platforms such as AirBnb if the tenant is absent. City officials claim that these rentals are being used to set up "illegal hotels" that limit the supply of affordable housing for residents.

Outrageous rent in New York City is nothing new, but the alleged culprit—AirBnb—did not launch until 2008, though the city's rent problem can be dated back to the 1980s. How exactly has AirBnb been squeezing housing options for New Yorkers since before its creation? The short answer is that it has not. In a mind-boggling case of government dishonesty, the mayor and city council are blaming problems created by years of government overreach on the new guy in town.

Consider a 2003 National Bureau of Economic Research study by Harvard University professor Ed Glaeser on rent prices in Manhattan. The study found that land use regulations, such as "quantity controls, myriad zoning rules, or taxes and fees" heavily limit and increase the costs of new construction. Back in 2002, this created a regulatory burden for the median condo in Manhattan that accounted for 56 percent of the construction price. The study also concluded that for half of Manhattan condo dwellers, regulations cost at least $5,500 a year. For others, the cost was even higher.

Land use regulations prevent denser construction and building more units onto existing buildings. Construction regulations have increased in scale and scope and are now so overreaching that 40 percent of the buildings in Manhattan could not have been built today. With today's high level of restrictions on how builders can meet New York's housing demand, it is no wonder that rents are high.

Land use regulations are not the only devastating housing policies on the books in New York City. Rent control and rent stabilization both increase rents for those who are not lucky enough to access an eligible apartment. Not only are these tenants harder to evict, but they are also more likely not to move.

On one street in Manhattan with controlled and uncontrolled units, 35 percent of controlled units had the same tenant for over 20 years while less than 3 percent of tenants paying the market rate had been there that long. Tenants who are able to stay in subsidized homes that they may not need only exacerbate the housing shortage.

De Blasio's plan would drive up rents in the same way as does rent control. His plan recommends that the rent for a two-bedroom apartment be set at $775, while the median market rent for a comparable apartment is $4,700. Developers will not simply cut their losses on the portion of units that must be made available at a lower rate. Instead, they will pass their costs along to tenants in uncontrolled units. Rents go up, market forces are distorted, and the crisis continues.

Furthermore, AirBnb is simply not a large enough operation to have an effect on housing prices. AirBnb currently has 41,000 listings in New York City. This is just over one percent of the three million housing units in the city. Even if every AirBnb listing were filled year-round by tourists or business travelers, it is not possible for such a small fraction of available housing to push up rents in any noticeable way.

In an attempt to give validity to their war against AirBnb, city leaders try to portray home sharing as a net loss of 41,000 housing opportunities for locals and a tax-free paycheck for wealthy scammers. The claim that AirBnb users set up so-called illegal hotels and turn entire apartment complexes into unregulated temporary residences paints a dark picture of home sharing. After all, what could possibly be a better narrative for de Blasio than the rich cutting corners at the expense of the poor?

Reality is more positive for AirBnb. Instead of a platform for the rich, AirBnb is an asset to the poor and middle class. The average AirBnb host makes about $5,500 a year from the service, money that 76 percent of users say helps them stay in their homes or apartments. Most devastating to the city's narrative of illegal hotels is that 90 percent of New York City hosts rent out their permanent home.

Living in Manhattan will always be more expensive than living in rural Oklahoma. But that is no excuse for New York City policymakers to drive housing costs even higher. If de Blasio truly wants to help low-income New Yorkers, he should not regulate away a source of extra income. Similarly, there is no way to combat the housing affordability crisis without expanding the supply of housing. It is not AirBnb that causes high rents, but politicians.