He's threatening a media outlet for doing little more than verifying that Trump has indeed done things that he previouly bragged about doing. 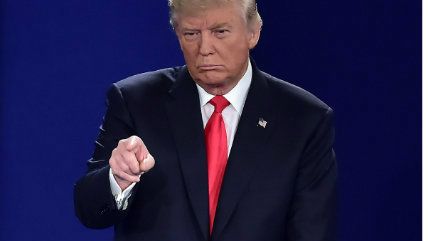 Donald Trump's threat to file a libel lawsuit against the New York Times is yet another indication of the Republican nominee's dangerously authoritarian impulses and blatant disregard for the First Amendent.

Yet it's also new ground. Trump's threats in this instance go beyond the insults and mockery that have come to characterize the candidate's relationship with the media over the past year. He's now moved on to threatening direct legal action against a specific media outlet for doing little more than verifying that Trump has indeed done things that he previouly bragged about doing.

Trump has almost no leg to stand on, legally, but that's somewhat beside the issue—the real question is: if this is how Trump acts as a presidential cadidate, what would he do as president, when he would be able to tell federal prosecutors to do his bidding, rather than using his personal attorneys?

Here's how we got here. Last weekend, an audio recording leaked of Trump in 2005 bragging about how he routinely sexually assaults women to Access Hollywood host Billy Bush. He explained this away as nothing more than "locker room talk" (even though it isn't) and during Sunday's presidential debate he claimed to have never done the things he bragged about doing. On Wednesday, the New York Times (followed shortly by other outlets) dropped a bombshell of a story that included accounts from two women who said Trump touched them inappropriately and without their consent.

Trump denied those allegations, yelled at the Times reporter who contacted him for comment and, as soon as the story appeared on Wednesday night, had his lawyers draft a letter threatening to sue the Times if they did not retract it. The Times is standing by their story.

A few caveats: Trump hasn't actually filed a lawsuit, so we are breaking one of the oldest rules of news by talking about a potential lawsuit before it's filed. This might just be bluster—possibly intended to intimidate the Times into a retraction but also meant to scare other outlets off similar stories.

Even if it's all bluster, it still reveals something about Trump's character. Sure, he's threatened to go after newspapers before. In February, he said that he would like to "open" libel laws to make it easier for public officials to sue media outlets over unfriendly coverage. That's terrifying enough in theory, but now he's taken an actual step towards fulfilling his First Amendment-shredding promise.

"Through his words and actions, Trump has consistently demonstrated a contempt for the role of the press beyond offering publicity to him and advancing his interests," said Sandra Mims Rowe, chairwoman of the Committee to Protect Journalists, in a statement on Thursday. "Donald Trump, through his words and actions as a candidate for president of the United States, has consistently betrayed First Amendment values."

The next step would be to actually file the lawsuit—which, again, Trump hasn't done.

If he does take the Times to court, Trump would appear to have almost no case. As a public figure, he would have to prove that the Times' story was wrong, that their reporting was reckless and that there was actual malice in their coverage (basically that they knew they were wrong and went ahead anyway just to damage him politically) in order to win the libel suit.

If Trump believes that "the law of this country forces us and those who dare to criticize him to stand silent or be punished, we welcome the opportunity to have a court set him straight," wrote David McCraw, an attorney for the New York Times, in a response to Trump's lawsuit threat.

Winning the lawsuit wouldn't necessarily be the goal. Trump could force the Times (and his accusers) to spend lots of money fighting him in court. He's no stranger to the idea of using lawsuits to bleed opponents until they run out of money, and that could deter other victims from coming forward or other publications from reporting on them.

Even if none of those potential harms are realized, you're still left with the basic absurdity of Trump's argument here: that something he's admitted to doing—bragged about doing, in fact—would somehow be off-limits to journalists.

You're left with a man who wants to be president but fails to grasp the importance of the basic rights held by the people of the country he wishes to lead.

You're left with a man whose understanding of the First Amendment boils down to whether he finds coverage to be "fair" or not, as he told the Washington Post earlier this year.

A man who has now gone beyond making threats about how he would attack the First Amendment if he were elected president. He's now taking action, and there's little reason to believe he will change his approach after the election.