It's frustratingly difficult to argue the U.S. is not a rape culture when one candidate is a sexual predator and the other is married to Bill Clinton. 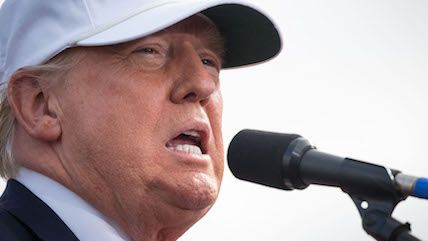 Two women have put forth claims that Donald Trump groped and kissed them without their permission.

We'll never know if they're telling the truth, because there are no witnesses who can corroborate their claims—except, of course, for Trump himself, who was caught on tape boasting about doing exactly what they said he did.

"You know I'm automatically attracted to beautiful [women]—I just start kissing them," Trump told Access Hollywood's Billy Bush, according to an audio tape leaked to The Washington Post on Friday. "It's like a magnet. Just kiss. I don't even wait. And when you're a star, they let you do it. You can do anything. Grab them by the pussy. You can do anything."

On Wednesday, The New York Times reported that two women now say Trump did to them the exact things he described in the statement above. Jessica Leeds, now 74, claims Trump groped her during an airline flight: he grabbed her breasts and tried to put his hand up her skirt.

And in 2005, then-22-year-old Rachel Crooks was forcibly mouth-kissed by Trump, she told The Times.

Trump supporters will describe these allegations as he-said/she-said. But that's not quite right, because, again, Trump already admitted on camera to committing these exact crimes.

Reason readers know that I am often critical of the idea—hypocritically promoted by none other than Hillary Clinton—that we should automatically believe alleged victims of sexual assault. (Clinton supporters have happily ignored inconvenient allegations against Bill.) The believe-all-victims mantra is frequently cited in the context of campus rape disputes, where anti-rape activists give the impression that they believe accused parties should be deemed guilty without any shred of due process. These accusations are often more complicated than either side would like to believe: they run the full gamut, from undeniable sexual assault to possibly genuine misunderstanding to deliberate fabrication.

The allegations against Trump are categorically different, and that's because Trump himself has not only admitted to such behavior—he's bragged about it, for decades. He was proud of his ability—afforded by wealth and status—to take advantage of women.

Trump's own words confirm his deplorable behavior. And then there are the women's statements in The Times. Plus Trump's ex-wife's testimony. And (underage) pageant contestants who say he barged in on them in the dressing rooms. This too. Oh, and this.

Automatically believing all victims is the wrong approach: the right approach is to soberly assess the facts. And the facts undeniably suggest that Trump is the monster he himself claims to be.

In this case, I believe Trump (circa 2005) and the victims, since their accounts are philosophically in agreement. (The Trump of 2016 denies the allegations, and also thinks Ted Cruz's father was involved in the Kennedy assassination.)

Meanwhile, Rush Limbaugh had this to say:

I read this and halfway through it dawned on me w/horror that Limbaugh was talking about the primacy of consent as if *it was a problem*. pic.twitter.com/k6CVvKvmqA

But… "consent" is the magic key! Yes, you can do whatever you want to another person, sexually speaking, as long as you have their consent. The campus left, unfortunately, has put forth the unworkable claim that consent must be verbalized before each and every new sex act—that men and women aren't capable of reading the mood and mutually deciding to escalate things without aggressing against each other. It's a terrible shame that the far right—to the extent Rush Limabaugh represents it—is now putting forth an equally ludicrous claim: that consent is a bad thing.

It's as if, as Cathy Young claims in her latest article for Reason, Trump and his ilk are trying to prove leftist feminists right about rape culture.

Frustratingly difficult to argue U.S. is not a rape culture when one candidate is a sexual predator and the other is married to Bill Clinton