The Democratic presidential candidate knows a $15 an hour federal minimum would cost jobs, but supports it anyway. 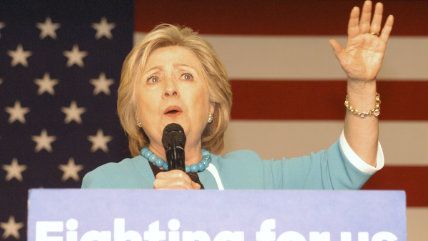 For much of the Democratic primary campaign, Hillary Clinton said she supported raising the federal minimum wage from its current $7.25 to $12 an hour. But over the course of a drawn-out race with rival Bernie Sanders, who supported a $15 federal minimum, Clinton shifted her position, eventually saying in April that she would sign a $15 minimum wage bill if given the opportunity. Clinton's shift on the issue mirrors the larger shift by the Democratic party as a whole.

One of the most remarkable things about the move by Democrats to support a $15 an hour federal minimum wage has been how divorced the idea has been from economic expertise. Not only have conservative economists warned about the negative consequences of such a move, but some of the party's own leading policy voices have said that it's dangerous and would almost certainly result in significant job loss.

For example, former Obama administration economic adviser Alan Krueger—whose work has helped lay the foundation for liberal arguments that smaller hikes in the minimum wage would not result in significant job loss—warned last year in a New York Times op-ed that a $15 an hour minimum wage would likely result in "severe" economic consequences, and that many areas of the country would not be able to absorb such a hike.

Behind the scenes, it's been clear that much—maybe even most—of the liberal policy community is uncomfortable with the idea, even though many have refrained from public criticism.

Even still, it's notable that Neera Tanden, the head of the Center for American Progress, cautioned the Clinton campaign last year about supporting a $15 federal minimum wage.

As Sean Higgins of The Washington Examiner reports, an April 2015 email from Tanden to four senior Clinton staffersresponding to a list of policy proposals states that "Substantively, we have not supported $15—ysou will get a fair number of liberal economists who will say it will lose jobs." (The email was obtained through an illegal hack, and published by Wikileaks.)

It's worth taking a moment to put this in context: Tanden, a former Obama administration staffer, is the head of one of the largest and most powerful liberal policy institutions in Washington, and she is a leading figure for a top position in a Hillary Clinton administration. She's writing to a group of top Clinton campaign staffers, including Podesta, Clinton's campaign chairman and a former president of the Center for American Progress himself, Campaign Manager Robby Mook, and Communications Director Jennifer Palmieri, all of whom with intimate knowledge of the liberal policy consensus. And not only does Tanden state that many liberal economists would object to a $15 minimum wage because it would result in job loss, no one else on the thread appears to push back in any way.

What that means is that Clinton's top advisers—and, almost certainly, Clinton herself—know full well that there's essentially no good evidence, even from liberal evidence, to support moving to a $15 federal minimum, and are aware that doing so would likely cost jobs. But Clinton, under pressure from the party's left flank, has indicated that she would nonetheless support $15-an-hour legislation.

In its campaign form, this is purely cynical political pandering. In legislative form, however, it would have real and practical consequences. But for Clinton, the potential loss of millions of American jobs is apparently a small price to pay when compared with her own political future.