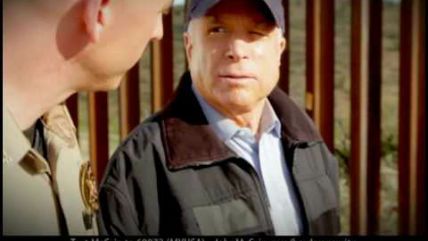 This morning, Republican Party presidential nominee Donald Trump warned that, in the wake of GOP defections from his campaign, the "shackles" constraining his behavior were finally coming off. Sure enough, it took Trump about three hours to swing his newly freed fists in the rhetorical direction of turncoat John McCain's face:

The very foul mouthed Sen. John McCain begged for my support during his primary (I gave, he won), then dropped me over locker room remarks!

First things first, is John McCain indeed "very foul mouthed"? I can't speak to his patter as a septuagenarian, but let's just say that his nickname as a teenager was "McNasty"—by all accounts (especially his own!) deservedly so. His dad swore so much he was known as "Good Goddamn McCain," a point of filial pride. McCain is also no stranger to "locker room remarks" about his exploits: "we exaggerated them for the benefit of our rule-abiding classmates," he wrote of his high school career, creating the "welcome fallacy that our excursions were somehow leading us to romantic opportunities that were only imagined in our all-male society." Much of his life from puberty until the Hanoi Hilton was an orgy of rule-breaking, heavy drinking, plane-crashing, and skirt-chasing, particularly if the wearer was an heiress, a model, or a stripper. (Don't get him started on Marie, "The Flame of Florida," or that one Brazilian fashion model he met during an R&R stay full of "excessive drinking, nightclubbing, and little or no sleep.")

Yet I would be shocked if McCain has ever during my lifetime spoken even privately, let alone while wearing a microphone on a television set, about forcing himself onto women or grabbing them in the privates. He has been a pursuer, yes, but not to my knowledge a masher, or a gross braggart. With the exception of his legendary and occasionally retributive temper, and the usual personal compromises of political life, the guy has always struck me as essentially decent, not boorish, on a human-to-human level. (Policy is a separate topic.) It's no accident, I believe, that the ancient Arizonan stood out among the Trump defectors by also stressing in his explanation Trump's ongoing hostility to individual justice in the Central Park Five case.

But of course McCain's potty-mouth is not what this is about. Trump's main insinuation here, that the senator dropped him opportunistically, is 100 percent correct. At a debate yesterday with Democratic Senate candidate Rep. Ann Kirkpatrick, McCain, according to the Casa Grande Dispatch, "found himself under stiff questioning, not just by Kirkpatrick but also the hosts of the debate, about his backing of Trump through personal insults like being told he's a loser for getting captured during the Vietnam war, through Trump insulting the parents of a Muslim soldier who died in Iraq, through Trump saying a judge of Mexican heritage had no right to hear a lawsuit against him over Trump University, and through Trump calling him a 'loser' for being defeated by Barack Obama in the 2008 presidential race." That about sums up the extent of McCain's self-degradations in the age of Trump.

As I wrote in May, when McCain was still facing a primary challenge and therefore lacked the stones to do anything except quietly signal to his social cohort that he really didn't like endorsing Donald Trump, the would-be maverick's dependably situational political morality is a symbol of GOP dysfunction that goes far beyond this election cycle, and will reverberate long after Trump is nothing more than the CEO of Hannity TV. The fact is, Republican elites are so frightened (and in McCain's case, appalled) by their own base that they zig-zag between outright contempt and (in election years) craven, wholly non-believable pandering. Never forget how low McCain scraped the last time he felt heat in an Arizona primary, nor how he appeased the hordes in 2008.

Whatever reconstruction process the GOP will attempt beginning next month has to begin, if it has any chance of convincing anyone, not with the summary purging of the Deplorables, but within the guts of the very party elite that made the new-alt-right possible in the first place. John McCain knows very little now about Donald Trump that his Senate colleague Jeff Flake knew from the get-go; it is with principled, limited-government conservatives like Flake that anything useful will emanate, not from weathervane big-government conservatives like McCain.

* UPDATE: Former FEMA director Michael Brown tweets in response that "Let me assure everyone. Despite his heroic war service he is absolutely one. I have personally watched it in his treatment of aides." When I asked him whether he meant "vulgar boor" or "a-hole," he replied: "Yes. Both. Vulgar boorish a-hole treatment of staff," and "It was one of those times you're watching a car accident & can't avert your eyes. Firefighters conference. Appalling. Behind the curtain."