'You Do Not As a White Cis Man Tell Me to Calm Down!' Angry Students Overwhelm YAF Meeting

Kansas students who hate the Constitution are making good use of the First Amendment. 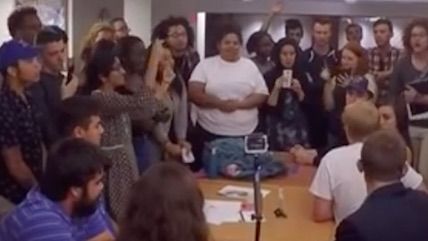 It happened again: After clashing with conservative students at the University of Kansas two weeks ago, leftists once again overran a meeting of the campus's Young Americans for Freedom chapter.

They had been invited to attend the meeting by the head of YAF, although I presume he did not expect dozens of them to show up—and to interrupt so frequently as to make any dialogue impossible.

YAF released an edited two-minute clip of the meeting, which gives us some idea of what happened. A black woman—the same student from the last meeting, apparently the leader of the leftists—accused a conservative of engaging in hate speech shortly after calling him an "entitled ass." Eventually, this woman and another female student began shouting and banging their hands on the table, which prompted one YAF member to ask them to calm down.

The student is of course welcome to speak as loudly and angrily as she wants—she might even have good reasons to be passionate. As far as I know, YAF invited these students to come, so I would not say that anyone's free speech rights were violated.

That said, the hypocrisy displayed by the leftists here is remarkable. They believe they have the right to speak as loudly and rudely as they wish—that no one gets to shut them down. At the same time, they favor some version of censorship for conservative students: They assert the right to be made "safe" from ideas that offend them, or make them uncomfortable. And they despise YAF for arguing against these kinds of safe spaces.

But if Kansas's campus were to become a safe space—and if the university were to enforce a policy of obligatory emotional comfort in a remotely even-handed way—it's the liberal students would who feel the brunt of the censorship. You can't organize a mob, bang on tables, and scream in people's faces while simultaneously insisting that everybody's subjective feelings of discomfort should trump free speech. These leftist students have a lot of contempt for the Constitution—they say so in the video—and yet they are completely reliant upon the protection of the First Amendment, which gives them the right to shout hurtful things at people who disagree with them.