Inside the Bitter Lobbying War Over Police Body Cam Contracts 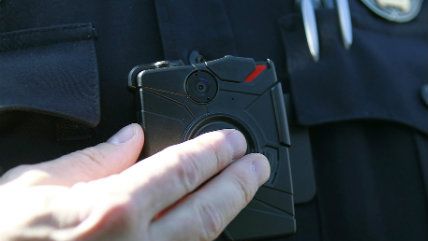 Last Friday, the New York Police Department awarded a $6 million contract for its long-delayed body cam program. It was a cause for measured celebration among the civil rights advocates who have complained about the NYPD's interminable rollout of body cams, but in at least one corner of town, it was a bitter defeat.

The NYPD contract was awarded to VieVu, one of the two dominant body cam manufacturers in the U.S. VieVu's main competitor is Taser International, whose stock price tumbled 12 percent on Friday on the news that it had been passed over for the contract. While Taser is famous for making stun-guns, it bet several years ago—correctly, it appears—that most police departments would someday soon be equipped with body-worn cameras. Since then, Taser and VieVu have duked it out in city after city, vying for lucrative public contracts for police body cams.

For example, the East Bay Express revealed last December that Taser had hired a well-connected lobbyist in Oakland to muscle in on VieVu's contract. The lobbyist set up meetings between city councilors and Taser officials to demo the company's products. The Wall Street Journal also obtained emails revealing that Taser "coached local officials on how to avoid common bidding procedures, allowing it to secure lucrative contracts without facing competition."

So I was less than surprised when a staffer from New York-based communications and lobbying firm Scheinkopf emailed me out of the blue last week and offered to pass along a handy fact-sheet detailing the ways in which VieVu's body cams were deficient, and to put me in touch with New York City Councilman Robert Cornegy for an interview.

Over the phone Friday, Cornegy told me he had "tremendous concerns" with VieVu's history of performance in other cities. For example, the Oakland Police Department revealed in August that it had accidentally deleted a quarter of all its stored body cam footage while updating its VieVu software.

"I'm not sure why we'd choose to enter into contract with a product that, at the least, is subpar and, at worst, defective," Cornegy said. He also said the New York City Council's influential Black, Latino, and Asian Caucus was considering drafting a letter in opposition to the contract.

When I asked Cornegy if he'd had any meetings with Taser representatives, he said he hadn't, because that would have been inappropriate.

I also verified with the Cincinnati Police Department that the product testing report was real, but I didn't know for certain whether it had been provided as part of a concerted PR push by Taser, shielded as it was by layers of lobbyists and public relations firms.

I was, of course, not the only reporter that Cornegy and Scheinkopf had reached out to—he gave interviews to The New York Post and New York Observer, both of which cited the Oakland and Cincinnati issues—nor was I the only one who had caught the unmistakable whiff of money behind the story. Politico New York, doing some admirable sleuthing, reported Thursday morning:

One of the documents shared by Cornegy—a report written by the Cincinnati Police Department which outlines concerns with the Vievu cameras—lists the document's owner as "IFields," which seems to refer to Isaiah Fields, the Vice President of Associate General Counsel at Taser International.

Another document shared with POLITICO New York by Cornegy—a Microsoft Word document with detailed information about VieVu's performance—showed in its metadata that the document was last saved by Patrick Jenkins, the well-known political operative and consultant who runs his own strategic communications and lobbying firm.

Jenkins, reached by POLITICO New York, confirmed he had indeed been hired, last week, by Taser International, on a $15,000 per month contract.

A spokesperson for Cornegy initially said the information the councilman received and shared with POLITICO New York did not come directly from Taser International.

"The information came from a consultant in the industry who asked not to be disclosed. All of the information was pulled from public records, however, including the Cincinnati report," said Alina Agusti, an associate for the communications and lobbying firm Sheinkopf, who was working on behalf of Cornegy.

VieVu has lobbied up as well. According to state records, the company retained Mercury Public Affairs to lobby the New York City Council's public safety committee on body cameras.

As I wrote in The Daily Beast last year, the rapid rollout of body-cam technology has outpaced policy and best practices surrounding their use. It has also opened up large pots of public money for companies to fight over behind the scenes, with little accountability. It appears to be an open question whether the public is getting the best product or the best propaganda.

NYPD officials told reporters on Monday that it had investigated VieVu's issues in other cities and was satisfied with the fixes the company had put in place since then.

Aiden Woglom, a spokesman for VieVu's parent company, Safariland, said in a statement to Reason that the company's products "are vital to today's policing efforts and we are honored to play an important role in maintaining public safety."

"If VIEVU has been the target of an unwarranted smear campaign, we will pursue all available legal remedies to protect our rights and business," Woglam said, "including potentially filing a claim of tortious interference against those responsible."

Taser International did not immediately respond to requests for comment.