The Trump campaign's detachment from reality is a recipe for unbound and unaccountable government. 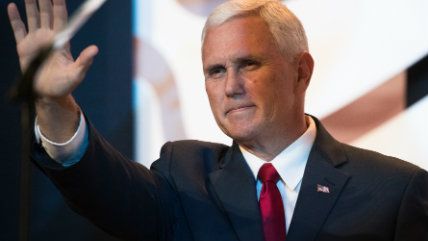 As Donald Trump's running mate, Indiana Gov. Mike Pence's role is to stabilize the ticket, attacking Clinton while balancing out Trump's wilder impulses. Most of the time, in other words, his job is to serve as a senior surrogate for the campaign. But Pence's performance at last night's vice presidential debate shows just how hard that is—and what sort of lies and evasions are inevitably required to defend Trump's statements and positions.

Throughout the evening, Pence came across as reasonably calm and steady. But he seemed to go out of his way to avoid directly defending Trump's record in any way.

Indeed, at one point, when challenged by Kaine to defend Trump's repeated praise of foreign dictators, Pence almost seemed to start in on a defense.

But Pence didn't offer a defense. He went back on the attack, saying, "I can make very clear to the American people, after traveling millions of miles as our secretary of state, after being the architect of the foreign policy of this administration, America is less safe today than it was the day that Barack Obama became president of the United States."

It's a remarkable moment, in which you can see Pence, Trump's vice presidential candidate, making the decision not to defend the top of the GOP ticket in real time.

And yet it was not the most remarkable moment in the debate. Over and over, Pence simply denied or refused to acknowledge things that Trump had said. Just to take one example:

Trump has repeatedly and publicly praised Putin. Last December, for example, Trump called Putin "bright and talented" and "he's running his country and at least he's a leader, unlike what we have in this country." In September of this year, Trump said that Putin "has been a leader far more than our president [Obama] has been."

Not only has Trump praised Putin's leadership, so has Mike Pence. Less than a month ago, Pence said, "I think it's inarguable that Vladimir Putin has been a stronger leader in his country than Barack Obama has been in this country." The remark was made on video, on national television. You can watch it here.

So Pence was unable or unwilling to defend Donald Trump—except by pretending that neither he nor Trump said what they most definitely said.

Yes, all politicians exaggerate, and most of them lie, some more than others. But Trump is wholly and completely untethered from reality, and so are his senior aides and surrogates. This is what makes the idea of a Trump presidency so worrying. With Trump as president, it would be impossible to have an objective discussion about, well, anything. And based on all the evidence so far, this would not only hold true with Trump himself, but with his circle of advisers and spokespersons, his policymakers and implementers. That is a path to policies that are not only flawed, but unfixable—and even, in some sense impossible to debate. It is a recipe for unbound government and creeping authoritarianism, a situation in which political officials do not acknowledge even the most basic realities, and thus cannot be held accountable in any meaningful way.

Indeed, it is more than a little bit telling, and perhaps frightening, that Pence lied about his and Trump's expressions of admiration for a Vladimir Putin, an authoritarian leader whose regime has been connected to the deaths of journalists critical of his rule. The authoritarian mindset often seeks to deny inconvenient truths, or stamp them out.

Bad policies and bad decisions made in good faith can be argued with, and even spin can be usually be addressed given a modest attachment to the truth. But Trump has no such attachment—and neither do his surrogates. And lacking that attachment to reality is practically a condition for defending Trump. The GOP nominee's persona and positions effectively require anyone in his orbit to detach from reality. As Pence's performance last night showed, there are only two ways to approach defending Trump: by not doing it, or by baldly lying.