The point of political reporting is to help provide context, not obscure it. 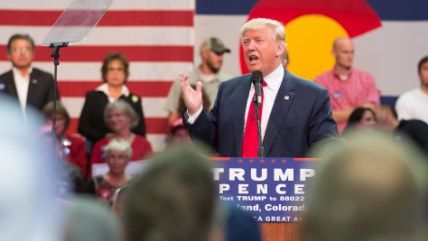 Monday's coverage of Donald Trump's speech to veterans is a prime illustration of a trend noticed in September by Salena Zito over at The Atlantic: Some reporters and headline writers are taking Trump's comments very literally rather than attempting to address the substance or trying to plumb what he's really getting at. Trump's supporters are the exact opposite—they're interpreting what he actually means from his rather inarticulate way of saying what he has to say. The gulf between the two cultures has inflamed the anger of Trump supporters over how the media behaves.

And honestly, with the way the media—or at least media headlines—have approached Trump's comments on Post-Traumatic Stress Disorder (PTSD) and veterans' health treatment, I honestly don't blame the Trump supporters. Here's what Trump actually said when asked about veterans and current suicide rates:

When you talk about the mental health problems when people come back from war and combat and they see things that maybe a lot of folks in this room have seen many times over, and you're strong and you can handle it, but a lot of people can't handle it, and they see horror stories, they see events that you couldn't see in a movie, nobody would believe it. Now we need a mental health help and medical and it's one of the things that I think is least addressed and it's one of the things I hear — like your question — one of the things I hear most about when I go around and talk to the veterans.

So we're going to have a very, very robust, very very robust level of performance having to do with mental health. We are losing so many great people that can be taken care of if they have proper care.

And the whole mental health issue is going to be a very important issue when I take over, and the VA is going to be fixed in so many ways, but that's gonna be one of the ways we're gonna help. And that's in many respects going to be the number one thing we have to do because I think it's really been left behind. Ok? Thank you very much.

So there is a path of criticism of Trump here, which is—just like many things he says in his public speeches—there's little actual content. There's a promise that things will be better under him with no real explanation why that will actually be the case.

What is not a legitimate path of criticism is to look at the totality of these comments and suggest that Trump thinks veterans are weak or that he somehow doesn't want to support them. And yet, that's exactly what happened due to writers deciding to run with "some people can't take it" and emphasize it in headlines like 'Trump Suggests that Soldiers with PTSD Aren't 'Strong,'" and the even more weaselly "Trump Appears to Suggest that Veterans with PTSD Are Not 'Strong.'" [emphasis added]

And, obviously, the Democrats are running with it, with Vice President Joe Biden responding with blustering outrage and Hillary Clinton's Twitter feed reminding folks of previous very stupid things (but unrelated) Trump has said about veterans.

But that first part of Trump's response makes perfect sense to somebody putting out a sales pitch, and the outrage is completely phony. Trump is suggesting that the folks in the crowd are strong as he pivots to the discussion of mental health issues, because, frankly, a lot of people who need help don't actually want to admit it. He's providing an answer to these veterans without suggesting to them that any of them in particular need to take advantage of it. It's actually a clever way of approaching the discussion that somebody with Trump's background might understand and somebody who has spent his or her life in public administration might not. He's selling access to a mental health service while grasping that the people who may need it are very reluctant to admit it. "This is for those other guys, not you guys," he's saying. But you would have to be pretty dense (or deliberately disingenuous) to think that Trump was unaware that there are people in that room who need help with PTSD.

This absurd disingenuous literalness is now being directed toward third parties as well. Gary Johnson's inability to identify a foreign leader he admires becomes an inability to name a foreign policy leader at all. Ron Paul says something positive about Green Party presidential candidate Jill Stein and it is represented as an endorsement of her over Gary Johnson.

In fact, while I was writing this very post, showing up among media types on Twitter is a new interview with Johnson on MSNBC where he rants about all the absurdity about the media being obsessed over him naming a world leader rather than concern about how America's foreign interventionism and "regime change" efforts has helped contribute to the PTSD problem. This is now being presented in a video clip on YouTube with the header "Gary Johnson Thinks Ignorance Is an Asset." Watch the clip below:

Obviously Johnson doesn't think ignorance is an asset. He is ranting about people who confuse facts with policies and that's exactly what is happening in response to his comments. It's the same phony literalness that,if nothing else, exposes how little certain people who work in the media think of citizens who see the world differently from the way they do.

And in the end, should Trump actually defeat Clinton, I suspect there will be no introspection about the inept and insulting method of spot-reporting of candidate's comments. People will be aghast that Trump won despite saying that veterans with PTSD are weak, even though the context of his comments suggest he didn't say anything like that. Media will remain horrified that Johnson can't name foreign leaders he admires, even though libertarians generally don't go around looking up to politicians. That's just not how they roll. That's like asking them to name their favorite prison guard.