The GOP candidate embraces and exaggerates common prejudices against the overweight. 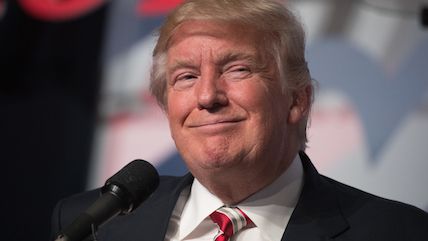 Anyone remember Jon Corzine? He was a wealthy investment banker who went into politics, spent huge sums of his own money and got elected U.S. senator and then governor of New Jersey. But in 2009, facing a challenge from Republican Chris Christie, he decided to make an issue of his opponent's weight.

His campaign, reported The New York Times, ran ads showing Christie "stepping out of an SUV in extreme slow motion, his extra girth moving, just as slowly, in several different directions at once" while a narrator said Christie "threw his weight around" to get out of traffic tickets.

It was as funny as a heart attack, and it embarrassed Christie. He declined to reveal his weight to a reporter who asked and said with uncharacteristic humility, "It's one of the more difficult things I've had to deal with in my life."

Corzine ran 5k and 10k races to show off his own fitness. But the tactic may have backfired with voters struggling with their weight. On Election Day, it was Corzine's ballot total that was lean.

It's bad enough for a trim politician to mock the overweight, but this line of attack is even riskier for a candidate of corpulence. Donald Trump, who weighs 236 pounds and claims to be 6'3″, qualifies as overweight, as defined by the Centers for Disease Control and Prevention.

His condition does not make him sympathetic to others with the same problem. Trump has a long record, which he lengthens every day, of disparaging people for what he regards as excess pounds.

One of those is the 1996 winner of the Trump-owned Miss Universe pageant, Alicia Machado, who dissatisfied him by gaining weight during her reign. It's not unreasonable to say that beauty pageant winners should adhere to the unrealistic standards of beauty pageants. But that's no excuse for publicly embarrassing her, as Trump did, lamenting, "This is somebody who likes to eat."

Hillary Clinton brought up his treatment of Machado in their debate, and Trump went into a self-destructive mania, fulminating against Machado day after day, including a flurry of tweets early Friday morning that claimed she had made a sex tape.

Maybe his overreaction stems from his fetish about slenderness. He has often insulted women who are not as thin as he prefers, from Rosie O'Donnell (a "pig") to Kim Kardashian (who has a "bad body"). At his golf club in Rancho Palos Verdes, California, the Los Angeles Times reported, one female employee was faulted for her weight and told repeatedly that "Mr. Trump doesn't like fat people."

A couple of months after Trump's wife gave birth, New York Post columnist Andrea Peyser marveled to him that she had lost all her baby weight—only for Trump to pointedly correct her, in front of Melania: "She's almost lost all the baby weight." What mattered to him, apparently, was not what her body had just gone through to produce a child but how soon that body would regain its original shape.

During the presidential debate with Clinton, Trump said the Democratic National Committee's computers may have been hacked not by the Russian government but by "somebody sitting on their bed that weighs 400 pounds." Trump looks for any chance to remind us that overweight people are unattractive and deserving of derision.

He embraces and exaggerates a common prejudice in our society against the overweight, who are often seen as lazy, slobby and self-indulgent. We tend to treat excess weight and obesity as things these people blithely choose, instead of an unwanted condition that millions of them regard with shame and try constantly to overcome.

Trump, who has no evident regard for morality when it comes to marital commitments, business contracts or the treatment of detainees, has no trouble depicting fat as a sin and a disgrace.

This habit invites trouble at the polls. Two-thirds of American adults are overweight, according to the CDC, and 42 percent are obese. There are far more heavy people than there are Republicans, who make up 27 percent of the electorate.

Come Nov. 8, Trump should worry that they will get their revenge. Some of them may have trouble forgetting: Mr. Trump doesn't like fat people.