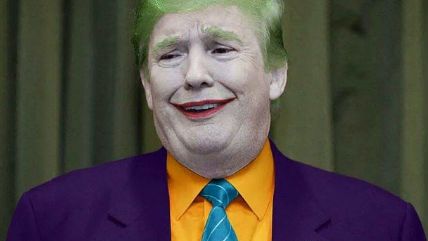 Building big monuments is the kind of thing potentates have been doing since the Pharaohs constructed the pyramids — except that more often than not these days, they produce not wonders of

the world but eyesores of the world such as the Romanian dictator Nicolai Ceausescu's "Palace of the People" in Bucharest — the world's "greatest monument to totalitarian kitsch." Here's a list of top 10 dictator architecture gone wrong.

But, apparently, when the potentate represents your own party, his profligate plans deserve a pass — no matter how much they go against what you've allegedly stood for. That is pretty much what the Republicans have been doing when it comes to Trump's infrastructure nationalism that I describe in my morning column at The Week. Indeed, Trump has picked up the liberal baton of Keynesian infrastructure spending, grown it by a factor of four, wrapped some gaudy jingoistic nationalism around it and what do the anti-pork, anti-spending, limited government conservatives do?

About 125 of them sign a letter throwing their undying support behind him! Among those endorsing Trump are fiscal conservatives such as Hearland Institute's Peter Ferrara and Larry Kudlow — never mind that in addition to a trillion dollars in infrastructure spending, Trump wants to out-left the left and expand child credits and mandate three months of employer-paid maternity leave. And there are social conservatives and self-appointed guardians of high civilization and culture such as Bill Bennett and Roger Kimball — nevermind that Trump is to these things what the Joker was to Gotham.

No doubt there is a good dose of raw, partisan tribalism driving them. But what's also to blame is the Clinton derangement syndrome. It has scrambled the conservative brain to the point that it can't see that Trump is making a mockery of everything it has fought for over the last eight years.

In my column, I describe just how baseless Trump's claims that America's infrastructure is crumbling are and how misguided his plans to fix it in the name of keeping up with China are. If Hillary had proposed this, the GOP would have gone bonkers. Yet here we are.