Poll: Active Military Members Have Had Quite Enough of Nation Building, Regime Change

15 years of war have exhausted and demoralized U.S. troops. 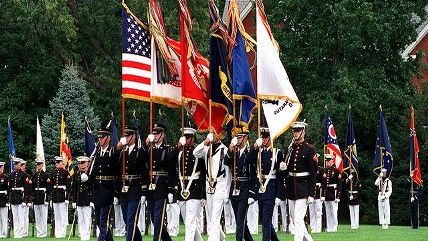 U.S. military forces have been "ground down by 15 years of combat, the longest period of continuous conflict in American history" and "The country is employing its military at a rate it cannot sustain," the editors of Military Times write in an editorial published earlier this week.

Comparing today's present state of the U.S. military to "the troubled 'hollow force' era that corrupted morale and eroded readiness in the years following Vietnam," the editorial also cites its own polling data which indicate active military service-people have had quite enough of the interventions of choice launched and administered by Presidents George W. Bush and Barack Obama.

The same military survey recently conducted by Military Times and Syracuse University's Institute for Veterans and Military Families which showed Gary Johnson and Donald Trump in a virtual tie for support among the nation's military also revealed that 55 percent "strongly" or "somewhat" oppose the "U.S. government's continued involvement with nation building in the Middle East and North Africa."

The Military Times editorial explains why support for the past generation of U.S. military interventionism is so unpopular with the military:

Beyond their break-neck operational tempo, military personnel have watched hard-fought gains evaporate in both theaters. Provinces and cities where American troops bled and died have fallen back into the clutches of brutal extremists whom the U.S. sought to displace in the name of peace, prosperity and democracy.

The list goes on and on and these fights aren't even over yet.

Adding that ongoing U.S. military operations aren't just limited to Iraq and Afghanistan, but also include "conducting airstrikes in Libya, patrolling the South China Sea, training NATO allies along Russia's borders," the editorial argues that feeding "America's war weary armed forces" with "vapid rhetoric" won't boost morale or make them any better equipped to perform their necessary duties, but "clearly defining and articulating strategic purpose and objectives" before committing to a "military solution" could help the active armed forces be more inclined to believe in their mission.

It's a statement that seems so obvious, you could imagine it doesn't need to be said. But given the fact that one of the two people who will be the next Commander in Chief thinks he can treat service-people like his own personal toy soldiers, while the other has never met a military intervention she didn't support, it's as good a time as any to belabor the obvious.

Our military is tired and they need to stop fighting other people's wars.