At a private luncheon yesterday. 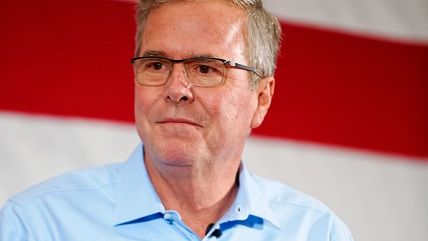 Jeb Bush suggested to attendees of a private luncheon hosted by the Manhattan Institute on the topic of educational reform that they ought to vote for Libertarian presidential nominee Gary Johnson, according to the New York Daily News, which spoke to a number of those who were present at the luncheon. Bush, the former Florida governor and 2016 Republican presidential candidate, was an early advocate of school reform.

"If I did get a call several weeks after the election, what would I tell President Johnson—I mean, President whoever," Bush reportedly joked in his speech, audio of which the Daily News says it has obtained but has not released. Then, when one attendee at Bush's table complained to him afterward that he couldn't vote for Republican presidential nominee Donald Trump or Democratic presidential nominee Hillary Clinton, Bush reportedly mouthed the word 'Johnson' to him.

Morgan Polikoff, an associate professor of K-12 education at the University of Southern California, tweeted that he attended the event and also confirmed the Daily News reporting.

A spokesperson for Bush said the former Florida governor did not deny the remarks but insisted that Bush had still not made up his mind about who to vote for in the presidential election, which is five and a half weeks away.