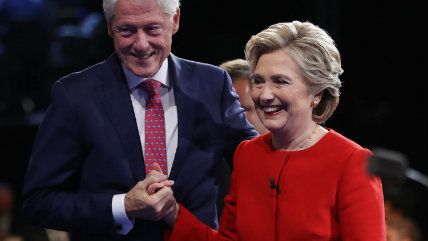 For a brief, fleeting moment during last night's presidential debate, I thought we might get a discussion about the federal budget. Budget issues—and in particular, the deficit and the national debt—have gone almost entirely unmentioned throughout the presidential campaign, but Hillary Clinton actually said the words "balanced budget" during the course of defending Bill Clinton's record as president in the 1990s.

"I think my husband did a pretty good job in the 1990s," she said. "I think a lot about what worked and how we can make it work again." After Trump cut in to complain that Bill approved the North American Free Trade Agreement (NAFTA), Hillary continued talking, mentioning millions of new jobs, incomes rising for everybody, and "a balanced budget."

The crosstalk heavy exchange wasn't exactly an Aaron Sorkin monologue, and the conversation quickly veered towards trade as Trump continued to harp on NAFTA ("the single worst trade deal ever approved in this country"). But it was something we haven't seen much of during this campaign: a direct defense of Bill Clinton's economic policies—including his balanced budgets.

That's nice to hear, even if only for a moment. But it would be more believable if Hillary Clinton's economic plans looked more like Bill's.

Under Bill Clinton, the federal government recorded a surplus from 1998 through 2001, the last year that the Clinton administration put forth a budget proposal. Bill didn't just balance the budget, though. During his administration, the size of the federal government was relatively restrained, dropping down to just a shade over 18 percent of the economy by the time he left office. Yes, total federal spending grew over his two terms—from about $1.4 trillion in 1993 to about $1.8 trillion when Clinton left office—but the economy grew even faster.

Hillary Clinton's proposals, in contrast, would allow annual deficits to continue to rise, as the Congressional Budget Office (CBO) projects, and would probably raise them somewhat during her first term, according to one estimate. And while she has laid out plans to increase taxes almost enough to cover the $1.8 trillion price tag for her new spending projects, she wouldn't stop the national debt from increasing from already unusually high levels over the next decade. And she has ruled out many of the sorts of major entitlement reforms and spending cuts that would likely be necessary to meaningfully reduce the debt.

The balanced budget isn't the only part of Bill Clinton's economic policy legacy that Hillary Clinton would be unlikely to replicate. Bill's administration took a hands-off approach to regulating the internet; Hillary has vowed to enforce strong net neutrality rules. Bill signed a welfare reform law that has helped reduce poverty; Hillary has indicated that she would revisit the law. Bill signed NAFTA, opening up trade along the border; Hillary has reversed her initial support for the Trans-Pacific Partnership and has backpedaled on free trade.

Indeed, during the same segment last night, she essentially refused to mount a direct defense of NAFTA. Here's the complete exchange:

CLINTON: Well, actually, I have thought about this quite a bit.

CLINTON: And I have—well, not quite that long. I think my husband did a pretty good job in the 1990s. I think a lot about what worked and how we can make it work again…

TRUMP: He approved NAFTA, which is the single worst trade deal ever approved in this country.

CLINTON: Incomes went up for everybody. Manufacturing jobs went up also in the 1990s, if we're actually going to look at the facts.

When I was secretary of state, we actually increased American exports globally 30 percent. We increased them to China 50 percent. So I know how to really work to get new jobs and to get exports that helped to create more new jobs.

TRUMP: But you haven't done it in 30 years or 26 years or any number you want to…

CLINTON: And I have been a secretary of state…

CLINTON: And I have done a lot…

TRUMP: Your husband signed NAFTA, which was one of the worst things that ever happened to the manufacturing industry.

It's an incredibly telling moment.

Hillary Clinton—who had an insider's view of the White House when the trade agreement was signed, the former senator and Secretary of State who is renowned for her grasp of policy arcana, who is sometimes criticized for being overly detailed in the way she talks about policy—is given a chance to defend NAFTA against a blithering, incoherent opponent who cannot name one single thing he actually wants to change about the trade deal he constantly lambasts, and all she can muster is the content-free middle-school retort, "Well, that's your opinion."

What you see in that exchange is the subtext of so much of Hillary Clinton's breezy talk about the virtues of the 1990s. She isn't really looking to see "what worked" and how those policies can be made to work again. She isn't really touting Bill's policy record. Instead, she's touting its effects while refusing to defend or flatly rejecting the major economic initiatives that shaped the era. Hillary Clinton wants the booming economy of the 1990s—but she doesn't want its policies.