Clinton Bemoans Those Who 'Try to Destabilize the World', But That's What She's Done

Complaints about Donald Trump don't make the U.S. any more a responsible player on the world's stage. 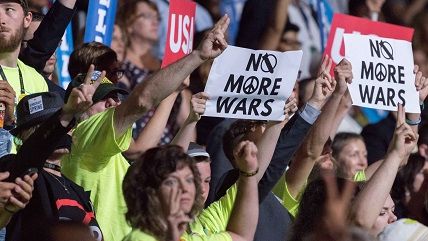 Hillary Clinton tried to present an image of herself as a steady hand ready to be leader of the free world, criticizing Donald Trump for questioning the wisdom of the United States' various foreign entanglements and insisting the U.S. remain commited to them.

"Words matter when you run for president, and they really matter when you are president," Clinton said. "And I want to reassure our allies in Japan and South Korea and elsewhere that we have mutual defense treaties and we will honor them." America's word, Clinton argued, had to "be good." Clinton asserted that the world was following the presidential campaign "so closely," to "get hints about what we will do."

"Are we going to lead the world with strength and in accordance with our values?" she asked. "That's what I intend to do." Clinton said she would "stand up to bullies" abroad and at home, and that the U.S. could not "let those would try to destabilize the world to interfere with American interests" get away with it.

Perhaps she should start closer to home than she thinks. A global survey of residents in 68 countries in 2014 found that 24 percent ranked the United States as the greatest threat to peace, putting it in first place. That included 37 percent of residents in Mexico. The poll was taken in 2014, almost a year before Donald Trump announced his candidacy for president and nearly two years before a President Trump was acknowledged as a distinct possibility by most people.

American leaders need not look far to find "those who would try to destabilize the world to interfere with American interests"—the United States does a good job of that on its own. The U.S. war in Iraq helped to create the space for the metastasis of ISIS in the region, and U.S. interventions in Libya and the continued occupation of Afghanistan created the space for ISIS in those countries. A counterterrorism campaign in Yemen once hailed by the Obama administration as a model for a new way to wage the war on terror eventually yielded a collapse of the government and a prolonged proxy war waged by Saudi Arabia against allegedly Iranian-backed rebels. Hillary Clinton's "accomplishment" in Libya didn't just help ISIS set up shop there, it spread weapons from Mali to Syria, helping to destabilize countries and aggravate conflicts across North Africa and the Middle East.

Donald Trump, on the other hand, insisted at the debate that the U.S. could not be the "policeman of the world." Unfortunately, while he presents himself as a skeptic of past wars, he appears to be a booster for new ones. An honest debate about intervention is another conversation American voters won't get to see on the debate stage if third party candidates like Gary Johnson, who describes himself as a "skeptic of interventionism," are excluded, hosts continue to ask softball questions on U.S. foreign policy, and progressives continue to marginalize the damage that candidates and presidents they support have wrought internationally.