Moderators Should Do More Than Fact-Check Debates: They Should Proactively Present Candidates With Facts

Journalists have a responsibility to present voters and candidates with accurate information. 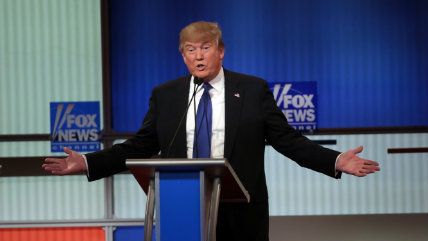 As tonight's presidential debate approaches, an odd meta-debate has developed about whether the moderator should fact-check the two candidates in real time during the event.

The correct answer to this seems pretty clear: Of course the moderator should fact check the candidates—both of them. Both Donald Trump and Hillary Clinton have long records of lies and misleading statements that should provide plenty of fodder for correction and clarification, and voters have a clear interest in seeing how candidates respond to fact-based pushback.

But debate moderators should focus less on employing facts reactively and think more about how to employ them to set-up their questions: Rather than making a point of quibbling over every detail, the goal should be to present the candidates with objective, policy-specific reality and then the candidates to respond.

Now, you can understand why a moderator might want to avoid fact checking during a debate. The debate is supposed to be between the two candidates, not between a candidate and the moderator. Real-time fact checking is risky, because moderators, even good ones, always stand a chance of getting their facts wrong too. Sometimes journalistic fact checkers have checked facts that are in dispute, or are not even facts. It's a difficult job. Talking to The New York Times about his role moderating a debate between George W. Bush and Al Gore, Jim Lehrer said he "just wanted to make sure that their positions and differences would be explained by them. I thought it was up to each candidate to correct the other's facts. Because if I fact-checked everything, that's all I'd do all night." Instead, he saw himself as a "facilitator."

But the risks don't outweigh the responsibilities. Moderators are not merely question-asking machines designed to elicit responses; they are journalists with commitments to presenting accurate information to the public and serving as surrogates for voters.

So if a candidate, in the course of explaining his or her views on a subject, makes a claim that appears to be false, the moderator should always consider a follow-up saying so, and asking how they respond. That's better for voters, who have an interest in finding out how candidates respond when presented with a correction, and it's also fair to the candidate, who then has an opportunity to make a case for his or her understanding of the issue and the relevant facts.

Obviously this approach can obviously be taken too far. If a candidate claims savings of half a trillion dollars from a proposed program, and the best estimate is more like $400 billion, it's probably best left for those with column inches to fill to note the discrepancy. Moderators should avoid quibbling and nitpicking. But as a general guideline, a follow-up that challenges a factual claim isn't a way of taking sides or abandoning the role of facilitator. It's a way of eliciting important information about how a candidate understands an issue by presenting the candidate with facts and asking for a response.

And that—even more than the kinds of on-the-fly corrections we typically associate with fact checking—should be the primary goal of the moderator with regard to facts: to expose candidates to policy reality and see how they react.

This is not quite the same as real-time fact checking, though there is some overlap. Instead, it requires journalists to establish a factual reality for the candidate to confront.

To see how this can work, it's worth looking at one of the best moments from the primary debates. Back in March, Fox News moderator Chris Wallace asked Trump about his claim that he could cut $300 billion a year from the federal deficit by negotiating Medicare drug prices. Wallace put up a full-screen slide showing that the Medicare only spends $78 billion a year on drugs. How, exactly, Wallace asked, could Trump manage $300 billion in savings? The two went back and forth for a bit, with Wallace trying to elicit a clear answer and Trump vaguely suggesting that the savings would come from the economy as a whole, and Wallace noting that this was not the same as the federal deficit. Trump ended by seeming to insist that his $300 billion savings number was accurate.

It was a remarkably instructive exchange, one that not only aimed to provide information about policy, but also showed how Trump reacted when presented with a contrary set of facts (by trying to change his story, and then insisting that his old story, impossibly, was correct).

That makes it the sort of exchange that should serve as a model for how moderators can bring facts into the debate: It was policy based, grounded in specifics, and it asked a candidate to clarify one of his own proposals—pretty much the definition of a question that is fair game for a candidate and relevant to voters.

Sure, there was an element of fact checking to the question, in that it "checked" one of Trump's policy proposals, but it was effective mostly because it presented accurate information to viewers by building that information into the question itself. In other words, it did what journalists are supposed to do: It established clear facts on the ground, and then asked questions designed to elicit additional relevant information from there.