'My Pronouns Are They!' Hysterical Kansas Students Inadvertently Make the Case Against Safe Spaces

Discussion between leftists and YAF conservatives was uncomfortable, angry, and necessary. 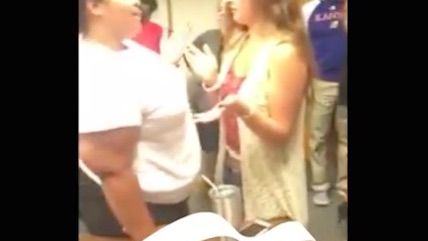 Leftist students at the University of Kansas showed up to a meeting of the campus's conservative Young Americans for Freedom chapter and berated them for opposing safe spaces—using increasingly hysterical and angry language.

Inadvertently, the activists made a great case against intellectual safe spaces.

YAF leader Gabe Lepinski had invited the leftists attend after a disagreement broke out between them on Facebook. (For an overview of that episode, visit Campus Reform.) A number of them showed up.

One of the YAF students—a white woman—was a bit edgy. But for the most part, the conservative students calmly attempted to debate the leftists while the leftists screamed at them.

"White fragility: look it the fuck up!" said of the leftist students, a woman of color. She later referred to the conservatives as "motherfuckers" before angrily pounding on the table. She even called them white supremacists.

After the YAF leader, Gabe Lepinski, referred to the group—which included men, women, and perhaps two trans people—as "guys," one of the activists exclaimed, "Do not call us guys! It's a fucking microaggression."

After about 30 minutes, Lepinski called an end to the meeting, but invited the leftists to come back next week.

Many people won't read beyond the obvious, hyper-partisan headlines here—FRAGILE SNOWFLAKE SJW GETS TRIGGERED or I CAN'T EVEN WITH THIS WHITE SUPREMACIST ERASING TRANS BODIES, depending upon your ideological persuasion—and that's a shame. Because that's not what I saw. When I watch the video, I see two groups of people who really do dislike each other, and have strong disagreements, engaging each other in a conversation that is deeply uncomfortable and even a little scary. The leftists used extremely hurtful and offensive language, and were even occasionally physically intimidating. The conservatives said things that the leftists thought were offensive, too.

For what it's worth, I think the leftists raised a number of good points, even if their delivery was hyperbolic. One of the leftists, a black woman of color, talked about the myriad ways in which her high school failed to prepare her for college. I have no doubt that some of the privileged members of YAF could benefit from hearing that.

But here's the thing: If the left's vision of a safe space was enacted throughout campus, they could have never had that discussion. The leftists continuously screamed insults and hurtful words at the members of YAF: what if YAF had responded by saying you make us feel unsafe? Would that have shut them up? Should it have shut them up?

I'm a little surprised, in fact, that more conservatives have not yet begun to use the language of the left for their own purposes. There is no doubt in my mind that a conservative involved in that discussion could have easily felt "unsafe" in the leftist sense—the triggered sense—at various points.

This is why it's so critically important to stop public spaces on university campuses from being made "safe" (to the extent that safe is a synonym for comfortable). There are a lot of difficult discussions that need to be had, and the fact that they make some people upset isn't a good reason to shut them down.