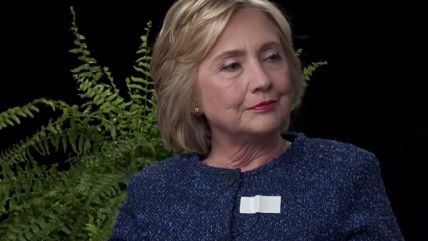 Is it just me or are "Funny or Die" videos starting to fall almost exclusively into the latter category?

Certainly there's very little that's smart or humorous about the new episode of the site's "Between Two Ferns," in which host Zach Galifianakis interviews the Democratic nominee for president, Hillary Clinton (click below to watch). Unlike the Q&A the Hangover star did with President Obama (which featured both some pretty harsh lines from the interviewer and some funny, well-delivered ripostes from Obama), this is liberal virtue signaling at its worst.

"Critics have questioned some of your decision-making recently and by you doing this show, I hope it finally lays that to rest," Galifianakis says. "Oh, I think it absolutely proves their case, don't you?" replies the former first lady, senator, and secretary of state. That's about as "funny" as it gets. At one point, Galifianakis plays a brief Trump ad in which the billionaire promises to "make America great again." Clinton feigns disdain and Galifianakis mumbles a line about how Trump's steaks come from the "asshole" of the cow. Haw haw haw.

Clnton's problems with millennials are widely known (and let's define millennials upwards, basically to anyone younger than she is). She is rightly understood to be an unappealing mix of war hawk and schoolmarm, the worst sort of buttinsky you'd never want to hang around. When she's not trying to strip away rights to expression (she has, in the words of Matt Welch, waged a decades-long war against free speech), she is defending misbegotten military interventions (going so far as to have retired Gen. John Allen literally scream about great future wars at the Democratic National Convention in a major speech).

"Between Two Ferns" is a comedy bit, so nobody's expecting anything remotely tough, but for it to actually be funny there's need to some edge. At its best, that's what made The Colbert Report so great. Colbert's version of Bill O'Reilly worked because it actually forced the liberal guests the audience presumably agreed with to break a sweat during their interviews. This episode of "Ferns," in contrast, is simply the worst kind of virtue-signaling. Yeah, yeah, we get it Hollywood, you're all good liberals (except for that ever-shrinking cell of Feel the Bern dead-enders and the oddball libertarian or three) and the edgiest thing you can possibly do is appear on stage with a woman who has signed on to all military interventions we've done in the 21st century, hates Uber and other forward-looking sharing-economy innovations, supports state surveillance and continuing the drug war, and was anti-immigrant and against marriage equality until about 15 minutes ago.

But the really important thing is to vote for Hillary Clinton because if Trump gets elected, forget global warming. It'll be plagues of locusts and boiling frogs or something. Whatever else you do, don't think of a more radical critique of a two-party system that is serving up more turd sandwiches than the Jimmy Johns in hell. These sort of celebrity interventions almost certainly accomplish less than intended. Indeed, because they are so self-serving and filled with smugness, solidarity with the powerful, and condescension toward the audience, they may well turn off the kids, just like all of Clinton's previous attempts at getting jiggy with it have done.

Between Two Ferns With Zach Galifianakis: Hillary Clinton from Funny Or Die