The Libertarian maintains support while the Green recedes, as the campaign enters what has historically been the best stretch for third-party candidates. 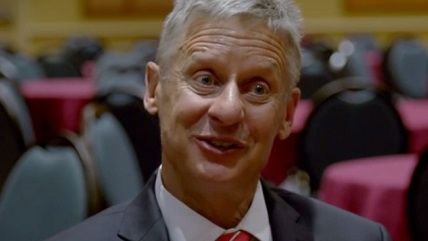 The Wall Street Journal does a nice job today mashing up Gallup's useful historical charts of third-party presidential polling, which has shown consistent, across-the-board collapses between mid-June and mid-September, with this year's numbers from Libertarian Gary Johnson and Jill Stein, which have shown no such thing. Take a look:

Ipsos President of U.S. Public Affairs Clifford Young tells the Journal that, "I believe this year third parties will outperform the historical average," and the Johnson/Stein data above certainly support that claim, but what of the 50 blank days going forward?

Two things jump out from the chart: 1) Check out those October bounces for Perot (twice) and even Ralph Nader, before a last-ditch November collapse, despite the fact that only '92 Perot was allowed to participate in the presidential debates. 2) If you squint really hard at the most recent trends for Johnson and Stein, there's a suggestion that things seem to be inching downward.

Are they really? Let's check. So in mid-August, when the Commission on Presidential Debates named the five national polls it would be averaging to determine whether third-party candidates met its (arbitrarily high) 15 percent threshold, Johnson across those five polls was averaging 9.8 percent, Stein 4.7 percent in the three polls that then included her. With the long-awaited release yesterday of the NBC News/Wall Street Journal poll, which had the percentages at 43-37-9-3 for Clinton-Trump-Johnson-Stein, that knocks the five-poll averages for Johnson-Stein to 8.2 percent and 2.8 percent. So that's definitely downward, right?

For Stein, yes. For Johnson, it's slightly less clear, because of the inevitably downward effect of adding Jill Stein as an option in two of the polls (in the three other polls, his decline was more modest, from 9.0 percent to 8.3 percent). The polls have also begun graduating from "registered voters" to "likely voters," which alters the results slightly in an anti-third-party direction.

But to answer the question more thoroughly than the Big Five basket allows, I cobbled together an apples-to-apples comparison of the last two polls from 11 different agencies that have A) conducted their most recent survey in September, and B) included Jill Stein in both. The 11 polls include four of the Big Five (NBC/WSJ, Fox News, CNN/ORC, and ABC News/Washington Post), plus Reuters/Ipsos, Economist/YouGov, NBC News/Survey Monkey, Quinnipiac, Morning Consult, Gravis Marketing/Breitbart, and Pew Research Center. Here are the latest new-poll averages for Johnson and Stein, versus the averages for those same polls the time before:

To be honest, I am surprised by those numbers. Not Stein's evident slippage in the face of a tightening election (and subsequent heightened scrutiny of her views), but Johnson's lack thereof. Now, it could be that Hillary Clinton's ham-handed Millennials panic could nevertheless lure some anti-Trump young'uns out of the Johnson camp. It's possible that when you focus more on state numbers (which I will be doing in this space soon) that the erosion starts to materialize. And obviously much will depend on the national reaction to Monday's Libertarian-less debate. But for now, evidence of Gary Johnson's nosedive remains stubbornly elusive on a national-poll level, while he heads into a 40-day stretch that has historically been among the best for third-party presidential candidates.

* Originally had those two figures reversed.