From Robert Downey Jr. to Martin Sheen to Julianne Moore to Scarlett Johansson, a "shit-ton" of movie stars tell you the proper way to vote. 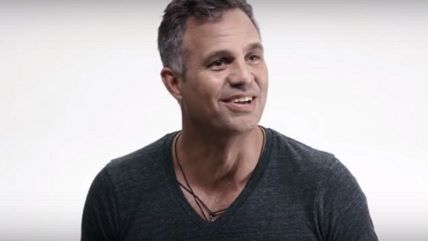 I like celebrities who get involved in politics at any level.

Hell, Reason TV was started by legendary standup comic, sitcom auteur, and Price Is Right host Drew Carey, who is an unapologetic and very public libertarian. I defended not only Colin Kaepernick's First Amendment right to do whatever he wants during the playing of the National Anthem (hey, rights don't even need defending—they're rights that can't be taken away!) but the broader idea of celebrity engagement with serious issues. More power to 'em, says I. The fact that they are getting over in life like an old studio boss on the casting couch is no reason to say that movie stars, athletes, rock gods, and the like shouldn't be allowed to criticize or participate in the system that has them rolling in dough and admiration.

And yet, I dare anyone who is not a full-on groupie or paid hanger-on of any of the folks who appear in this star-studded anti-Trump ad to not be offended by the noxious cloud of smug emanating from your internet-look-up device. "We cannot pretend both sides are equally unfavorable," rumbles TV president Martin Sheen in a voice plummier than a goddamn case of slivovitz. And there's the big problem right there, even bigger than the insistence that a bunch of well-known, meh-known, and little-known actors know more about your needs than you do: Who's we, Kemo Sheen-be? And what if we think about politics not a two-sided affair, but is something that exists in three-dimensional space, or on a goddamn Cosmic Cube (that terrible plot device in the Avengers franchise), or maybe even a dodecahedron die replete with 12 (count 'em!) sides? Gary Johnson, Jill Stein, even quitter-insurgent Bernie Sanders be damned, ooze the celebs in director Joss Whedon's spot. Come on, already, there are two and only two sides to every election. And besides, if Hillary wins, Mark Ruffalo (a great actor but under-developed policy wonk) will show you his dick. Really, because even when celebrities are trying to be serious, they can't quite not go for a cheap joke.

Full Monty references aside, this ad evinces precisely the kind of stuffing-vs-potatoes, "binary choice" thinking that's got us to the point as a country where the major-parties, despite all their massive advantages in money, power, and influence have coughed up a couple of historically hated hairballs like Donald Trump and Hillary Clinton. But really, say the celebs, don't even think about stepping away from this Sophie's Choice, even though a plurality of Americans now define themselves as independent and historic lows are calling themselves Democrats and Republicans.

You want an alternative way of celebrities engaging mere mortals? Here's an ad featuring Drew Carey, talking about why he's backing former Gov. Gary Johnson in this election. The most interesting thing about his pitch? It's a clear statement of his preference and includes some potentially persuasive arguments with no implication that a viewer is a total fucking idiot and moral cretin if you don't already agree with the speaker. On top of that, there's no mugging for the camera and self-parodic elements that undercut the commitment, as there in the Joss Whedon spot.

And while we're talking about celebrities and presidential endorsements, it's worth remembering what happened the last time a "shit ton" of celebs came out in favor of a particular candidate. In 2009, a whole host of well-known actors "pledged to serve" Barack Obama like he was god-emperor of Dune. Reason's Anthony Fisher and I caught up with them in 2012 to see how that was working out for them.