What If Donald Trump Jr.'s Bowl of Skittles Were Gun-Owners?

Fear mongering, despite the pretenses, is a bipartisan project. 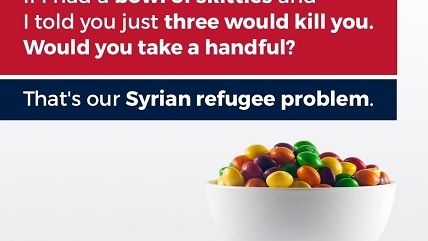 Donald Trump Jr. took after his dad and sent out a tweet that's riled social media up. The tweet was of an image of a bowl of skittles. "If I had a bowl of skittles and I told you just three would kill you. Would you take a handful?" the image, branded with the Trump-Pence logo, asked. "That's our Syrian refugee problem."

There are plenty of problems with it—people aren't skittles, there's more than a bowlful of them being admitted into the U.S. each year, a small proportion of them are actually from Syria, not even three are guaranteed to kill you, and the refugees go through a screening process.

Perhaps most importantly, some dangers are the cost of freedom. Countless real world phenomena could kill you, and it would be safest to sit under the bed in your bedroom and never go out into the real world. Progressives had their moment mocking Trump Jr. for his fearmongering, but it is a native language to the left as well. After any prominent enough incident of gun violence, progressive leaders will rile up their base by demanding vague "common sense" gun control and even demonizing law-abiding gun-owners.

So what if the bowl of skittles were made of gun-owners? Would those on the left mocking Trump Jr. "take a handful" then? Both gun ownership (self-defense) and freedom of movement can be considered natural rights, but neither the left nor right in this country accept both as such. When Trump insisted immigration was "not a right" (in the Constitution, it's not), many on the left mocked him. But not only does the left regularly deny that the right to bear arms is a right (in the Constitution, it is), but left-wing politicians like Bernie Sanders have even claimed that open borders were a "right wing ploy." The response that "refugees are people but guns are not" is inadequate—gun owners are people too.

Hillary Clinton has touted immigration reform, but she has not offered anything close to making immigration anything resembling a right. All "comprehensive" immigration reform really needs to do is permit law-abiding individuals to cross the border freely, and perhaps a dismantling of the welfare state to remove perverse government incentives for immigration. But for the left, as for the right, immigration reform is about imposing controls and extending the powers of the federal government.

Trump's unapologetic anti-immigration stand (both the illegal and legal varieties) and overt fearmongering over terrorism certainly makes it easier for Democrats to claim the high ground, but it does not erase Democrats' poor record on immigration (they helped scuttle efforts toward immigration at the tail-end of the Bush administration and it was not a priority when Democrats controlled the White House and both houses of Congress) nor their history of fearmongering. Barack Obama ran for re-election in 2012 on a platform that prominently included "killing Osama bin Laden." In Philadelphia last week, he insisted only voting straight-ticket Democrat would keep the U.S. safe, secure, and prosperous. And while his supporters tended to believe things in the U.S. were getting worse (why wouldn't they? Democratic politicians have been telling them so), at least Trump's success at parlaying pessimism in the future into popular support might cause Democratic politicians to reconsider the wisdom of downplaying an objectively bright future.