Civil Liberties and Military Force Are Not a 'Single Issue' 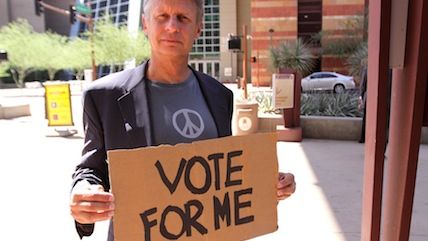 Kevin Drum of Mother Jones thinks it's odd that Gary Johnson has supporters on the left, an argument he elaborates by listing a bunch of Johnson's positions that liberals are unlikely to like. I'm not sure he has described all those stances accurately—Johnson has rejected the use of eminent domain to build the Keystone pipeline, and he recently surprised me by telling Politico that he opposes the Citizens United decision—but that's beside the point; I'm not writing this to convince progressives that they really should vote for the Libertarian Party's candidate after all.

I'm writing it because of something Drum says after the list:

Unless you're basically a single-issue voter on civil liberties and military force, it's hard to see why any lefty of any stripe would even think of supporting Johnson.

Not to state the obvious or anything, but "civil liberties and military force" are not a single issue. They aren't even just two issues. Suppose a left-leaning Johnson supporter were to print a long litany of places where Johnson agrees with the ACLU, with additional entries for each war where the candidate has said the U.S. should not be involved. If she were to wrap her post up with a dismissive reference to Johnson's liberal critics as "single-issue voters on regulation and spending," Drum would surely think that silly. The same principle applies here.

This is particularly vexing when it comes to foreign policy. The candidates' positions there arguably matter more than how they feel about any other group of issues, because that's where a modern president has the greatest power to act autonomously. Big economic bills don't get passed without lots of logrolling and horse-trading, but the White House enters wars without even bothering to ask Congress for permission—no, pretending that the 2001 Authorization for the Use of Military Force covers virtually everything doesn't count—and most legislators have no interest in seriously challenging that. We have reached a point where the president is most powerful in precisely the area where it's possible to do the most damage.

Under such a system, it is folly to think of military force as a mere "single issue." Yet Drum somehow goes further than that: In his accounting, it's just half the issue, sharing the space with the whole Bill of Rights. I can see why that formulation might appeal to Clintonites trying to shore up her support on the left, given that she's a consistent hawk who is frequently hostile to civil liberties. But for people who care deeply about those topics, they're not minimized so easily.