Says Trump is neither a Republican nor a conservative while Clinton is too far to the left and untrustworthy. 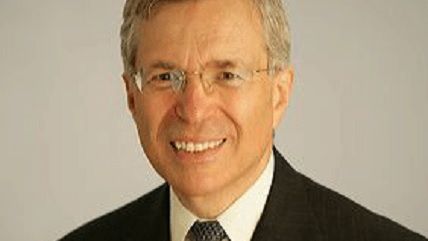 Dick Zimmer, who served as a Republican congressman from New Jersey from 1993 to 1997 and ran unsuccessfully for U.S. Senate in 1996 and 2008, has endorsed the Libertarian ticket, Gary Johnson and Bill Weld, for president and vice president, the New Jersey Libertarian Party announced today.

"As far as I can recall, I've never publicly endorsed any candidate except a Republican," Zimmer wrote. "I've split my ballot and have occasionally voted Libertarian, but always as a private matter." Not this time, wrote Zimmer, describing Donald Trump as "neither a conservative nor a Republican." Trump, according to Zimmer, does not believe in the Republican "founding principles of human equality and national unity.

Zimmer declined to go the route of some other anti-Trump Republicans, who have actually endorsed Hillary Clinton, calling her "one of the most left-wing members" of the Bill Clinton administration who has only "moved much farther to the left since then."

Clinton, wrote Zimmer, "believes in far too large a role for the federal government in our economy and in our private lives." Zimmer also dismissed the Trumpkin argument that a vote for Johnson is a vote for Clinton. "Current polling does not support that assumption," Zimmer wrote, "but even if it did, I think the Republic can survive four years of Hillary as it has survived eight years of Obama. I'm not sure I can say the same about Trump."

Zimmer wrote that he had never met Johnson in person, but that he admired Johnson's record as a two-term governor in New Mexico, where was a "principled, fearless small-government fiscal conservative" and similarly admired Weld's record as governor of Massachusetts.

Zimmer noted that he did not agree with everything in the Libertarian platform, but that the same could be said of the platforms of Republican candidates he's endorsed in the past. Yet, "the Libertarian ticket is clearly superior to that of either party," wrote Zimmer. "Both Gary Johnson and Bill Weld have far more experience and success as government executives than either of the major-party presidential candidates. They are both men of honor and integrity who deeply believe in the principles of the Constitution."

Zimmer is the third former member of Congress to endorse Johnson, who was also endorsed by sitting member of Congress Rep. Scott Rigel (R-Va.) and a slew of state legislators. Johnson also so far has more daily newspaper endorsements in the general election than Donald Trump.