The GOP candidate's event was a falsehood-filled advertisement for his new D.C. hotel. 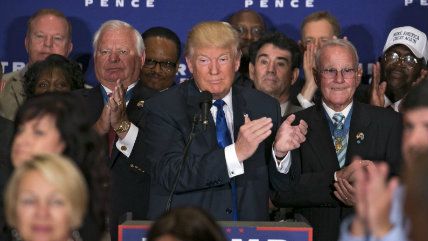 In March, after winning primary elections in Michigan and Mississippi, Donald Trump delivered a victory speech that was broadcast live on cable news. Trump's victory speech, however, was far from a traditional political victory address. Instead, it was more of an infomercial for Trump-branded products, including Trump-stamped wine, bottled water, golf courses, and steaks. Trump was using his political campaign as an advertising platform for his personal business ventures.

In the months since that event, reports have looked into Trump's other business dealings, including possible (but unconfirmed) ties to Russia, as well as the surprising amount of campaign money being spent on Trump-branded enterprises, raising even more questions about whether Trump, if elected president, would be able to separate his political operation from his personal financial interests.

Trump's latest event should put to rest any such questions. After announcing that he would hold a press conference this morning in which he would make a major announcement regarding his position about whether or not President Obama was born in the United States. Trump has long been among the most prominent individuals stoking "birther" conspiracy theories by questioning Obama's origins and eligibility for the presidency, including a 2011 stunt in which he made a show of sending investigators to Hawaii to look for the president's birth certificate. "You are not allowed to be a president if you're not born in this country. Right now, I have real doubts," Trump said at the time.

Trump's press conference this morning was not a press conference at all. Instead, it was another extended infomercial for his newly opened hotel in Washington, D.C., where the event was held. Trump previewed his remarks by tweeting that he would be "going to the brand new Trump International, Hotel D.C." and opened by touting its grandiosity. "I really believe, I said this would be the best hotel in Washington," he said, before musing that it might even be the greatest hotel in the entire world.

After his initial remarks about the greatness of the hotel, however, Trump barely spoke at the event. Instead, he turned over the floor to a group of decorated veterans who touted Trump's presidency. All of this, of course, was broadcast live on cable networks. Trump used the birther controversy to earn himself a half an hour of free advertising for his hotel and his campaign.

Only at the very end did he deliver on his promise of an announcement about his position on Obama's place of birth. During the 2008 campaign, he said, Hillary Clinton "started the birther controversy. I finished it." He now says he believes that "President Barack Obama was born in the United States, period."

Trump's claim that Clinton started birtherism is a telling and easily refutable lie. Some of Clinton's supporters during the 2008 primary campaign did indulge in birther conspiracies, but not the campaign itself. Trump, in contrast, spent years loudly questioning Obama's origins and eligibility for the presidency even after the matter was definitively settled. His campaign released a statement last night setting up today's remarks, saying that "in 2011, Mr. Trump was finally about to bring this ugly incident to its conclusion by successfully compelling President Obama to release his birth certificate." Obama released his long-form birth certificate in 2011, but his certificate of live birth had been released in 2008. In any case, it's a brazen rewriting of history for Trump's campaign to claim that the issue was settled for Trump after 2011. He continued—repeatedly—to tweet conspiratorial skepticism about Obama's birthplace as late as 2014, and told CNN in July of this year that he would love to continue talking about the issue, but that he doesn't because it would be a distraction. Trump himself, not Clinton, was—and remains—the vector for birther bluster.

Trump, in other words, has merely traded one birther conspiracy theory for another.

It's hardly a surprise, though, that Trump is not bound by the inconveniences of facts or reality. Most of the Trump-branded products he touted at his March press conference were long discontinued. The steaks he claimed as his own were actually from another company, Bush Brothers. Trump steaks do not exist and have not existed for years; the product was discontinued around 2007.

What Trump showed today, then, was an even clearer version of what he has shown so often throughout his campaign: that he is a shameless liar, a conspiracy theorist, and a huckster, and that he sees no distinction between his political efforts and his personal business dealings. He is unable or unwilling to separate rumor from reality, business bluster from political operations, personal dealings from national affairs. For Trump, there is no meaningful dividing line.

Trump is a crony capitalist nightmare, and today's event was another frightening reminder of his warped approach to the world.