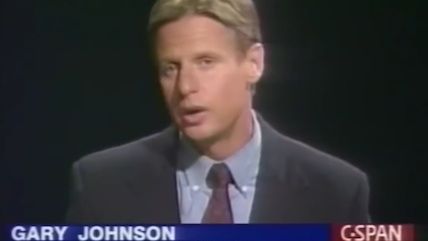 Bummed that they're barring Libertarian candidate Gary Johnson from September 26's presidential debate? You can still see him debate in the video below—and they let a Green on the stage too.

Needless to say, the clip doesn't come from this election season. It's from 1994, when Johnson was a 41-year-old Republican businessman running to be governor of New Mexico. He faces off against Bruce King, the incumbent Democrat, and Robert Mondragón, a former lieutenant governor running as a Green. Over the course of the hour, Johnson denounces the Bureau of Land Management, calls for slashing the size of the state government, and says he wants "an expansion of the charter school concept." King defends his record ("All of those figures that he gives are not true! I've got the actual s'tistics right here!") in an accent that sounds more southeastern than southwestern. And Mondragón, who was cursed with a droning speaking style but blessed with a great beard, gets to field the sort of spoiler question that people throw at Johnson today: "If your candidacy means getting Gary Johnson elected in the end, what will be the fate of these social reforms that you hold dear?"

Johnson wound up winning the race with 49.81 percent of the vote (Mondragón got 10.26); he was reelected easily four years later.