'Americans are tired of rigged systems,' Johnson retorts. 'We plan to be on the debate stage in October.' 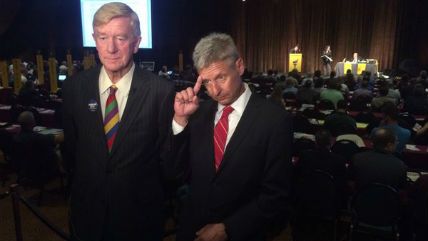 It's official, and it stinks: As expected, The Commission on Presidential Debates (CPD), the "nonpartisan" body co-founded and co-populated by the Republican and Democratic parties to control the terms of presidential-year debates, has announced the participants for the Sept. 26 presidential debate in Hempstead, New York: Republican Donald Trump and Democrat Hillary Clinton. The Oct. 4 vice presidential debate in Farmville, Virginia will also be limited to Republican Mike Pence and Democrat Tim Kaine. Libertarians Gary Johnson and William Weld, currently polling better than any third-party ticket since Ross Perot and James Stockdale in 1992, did not make the CPD's arbitrarily high threshold of averaging 15 percent across five pre-selected national polls.

Johnson, who is averaging 8.4 percent in those Big Five polls, has issued a statement, which reads in full:

I would say I am surprised that the CPD has chosen to exclude me from the first debate, but I'm not. After all, the Commission is a private organization created 30 years ago by the Republican and Democratic parties for the clear purpose of taking control of the only nationally-televised presidential debates voters will see. At the time of its creation, the leaders of those two parties made no effort to hide the fact that they didn't want any third party intrusions into their shows.

The CPD may scoff at a ticket that enjoys "only" 9 or 10% in their hand-selected polls, but even 9% represents 13 million voters, more than the total population of Ohio and most other states. Yet, the Republicans and Democrats are choosing to silence the candidate preferred by those millions of Americans.

Americans are tired of rigged systems, and the monopoly on debates created by the CPD is a prime and skillfully executed example.

Bill Weld and I will continue to fight to provide a voice and an alternative for independents, disenfranchised Republicans and Democrats, Millennials and others who aren't satisfied with Donald Trump and Hillary Clinton as their options.

It is unfortunate that the CPD doesn't believe such a voice should be heard. There are more polls and more debates, and we plan to be on the debate stage in October.

The Johnson campaign, which has made getting into the debates its primary focus, will now have to move on to Plan B, part of which will be reminding the Debate Commission and the political press that the CPD is supposed to behave in a nonpartisan manner in order to retain its tax-exempt status. Indeed the commission's announcement makes sure to underscore related buzzwords: "The nonpartisan, non-profit Commission on Presidential Debates ("CPD") announced today that it has applied its Nonpartisan Candidate Selection Criteria for 2016 General Election Debate participation to determine eligibility to participate in the presidential debate," the press release begins (emphases mine). The poll-averaging will be re-run in advance of the second and third presidential debates.

Stay tuned to this space for more reaction.

Related content from the Reason archive, in reverse chronological order:

* Johnson/Weld to Debate Commission: Let Down Your 15% Threshold Just This Once

* Military Members Are Into Gary Johnson, But NBC Won't Let Him Near Tonight's Forum