Johnson/Weld to Debate Commission: Let Down Your 15% Threshold Just This Once

Libertarian candidates promise that if allowed to debate Sept. 26, they will earn their way thereafter 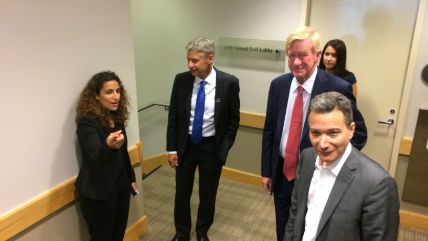 Libertarian Party presidential nominees Gary Johnson and William Weld took out a full-page ad in today's New York Times, addressing an open letter to the Commission on Presidential Debates (CPD), the bipartisan if technically nonpartisan outfit that is scheduled to announce the Sept. 26 debate participants as soon as tomorrow (though likely a few days after). In the ad, the Libertarians point out that solid majorities of Americans want them up there on stage, that they are polling at 15 percent in 15 states, and that "The conditions of the presidential election of 2016 are extraordinary and without precedent."

(As if to underscore that last point, a new Sept. 8-13 Quinnipiac poll, which shows Johnson with a record-tying level of 13 percent support, also found that less than one-third of Hillary Clinton and Donald Trump voters are doing so because they "like" their own candidate.)

The Johnson/Weld letter ends with this flourish:

Allow us to make our case to the American people. If, in the polls that follow, we fail to meet that 15% standard, we'll make no further efforts for inclusion in the subsequent debates.

Your board was empaneled to ensure fairness in the political process. This is an unparalleled moment in our nation's history and the eyes of the world are upon us all. We invite you to be on the right side of that history.

The CPD last month said it would announce the Sept. 26 finalists in "mid-September," which technically occurs midnight tomorrow. However, two of the five survey the commission selected to determine average polling numbers—CBS News/New York Times and NBC News/Wall Street Journal—haven't produced results in more than six weeks. Almost certainly, the debate commission will wait until those two polls come in. As mentioned here previously, Johnson would have to average 25 percent across both to meet the 15.0% threshold.

With the minutes to D-Day ticking down, and after nearly four months (including today at the Detroit Economic Club) of repeating that "To win we have to be in the presidential debates," Johnson and his campaign are lunging desperately for any available stick.

Bill Weld has been warning all month that the debate commission could "lose their tax exempt status" if they don't let the Libertarians in, a threat that Campaign Manager Ron Nielson slyly alludes to near the close of his let-them-debate op-Ed in today's L.A. Times: "The CPD, a private tax-exempt organization under section 501(c)(3) of the tax code, has the opportunity to do the right thing." (Keep in mind that the Libertarians were plaintiffs in a lawsuit against the commission as recently as last month.) CPD co-chair Mike McCurry, meanwhile, shot back a week ago that changing the "pre-established criteria" at this late date could put the commission in legal jeopardy, though it's hard to imagine exactly who would sue. Johnson did score some nice points, however, by snagging a debate-inclusion endorsement by an actual commission member, former Indiana governor and current Purdue University President Mitch Daniels. (Daniels was also quite generous in holding a public Q&A with Johnson last night at Purdue, attended by around 1,000 people, about which more stay tuned to this space.)

The campaign is also trying to work the refs—using argumentation of dubious quality—when it comes to the way the polls themselves are being conducted and received. Nielson in his piece today complained that the CPD's Big Five polls "often restrict themselves to head-to-head match-ups between Trump and Clinton," which just flat-out isn't true. Johnson in Detroit today complained at some length that his name has never been listed as the first option on a national poll, and that this has skewed results. PolitiFact looked at this claim in late August, and judged it "false," finding that:

Eleven of the [25] polls we looked at—close to half—included Johnson in their first or only question about the presidential horse-race. None of these polls vaulted Gary Johnson to 20 percent. In fact, he did slightly worse, on average, when he was included in the first horse-race question.

The debate-desperation is beginning to seep over into the pro-Johnson SuperPAC world as well:

If all these Hail Marys fail to snatch victory from the jaws of defeat, the campaign has been preparing the way for counter-programming outside the debates. That would depend on stoking outrage among the press and the public over the system being so obviously rigged. To that extent, Nielson makes perhaps the best argument of the lot:

There is also precedent to consider. In 1992, H. Ross Perot polled well through early summer when matched up against then-President George H.W. Bush and Bill Clinton. After he temporarily dropped out of the race, his numbers plummeted, and by the time he got back in he was only at 7 to 9% in national polls. (That's lower than Johnson by most accounts.) Nevertheless, he was invited to participate in the debates, and he went on to win 18.7% of the popular vote. If voters had not been given the opportunity to see him go head to head with the standard bearers of the obsolete two-party system, he would never have gone so far.

Shouldn't Johnson get the same chance?