Comparing the Apology Styles of Gary Johnson, Clinton, and Trump

Matt Welch asks in the L.A. Times, 'What would the world look like if politicians weren't always applying lipstick to their rhetorical pigs?' 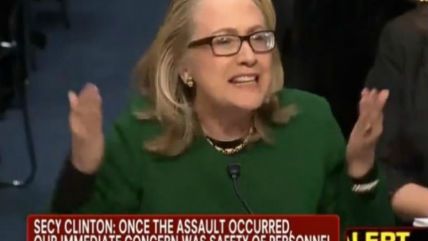 "Politicians aren't supposed to apologize," I write over at L.A. Times Opinion, "unless it's one of those sorry-not-sorry deals that precede yet another rant about why the opposing candidate is a dangerous cretin." We saw an exception to that rule last week with Libertarian Party presidential nominee Gary Johnson, who led with his chin after brainfarting on the word "Aleppo." This stands in sharp contrast to his competitors:

It was one year ago this month that eventual GOP nominee Donald Trump was given a long set of Mideast stumpers from radio host Hugh Hewitt. Instead of confessing his ignorance in real time — an ignorance, I hasten to add, that I and the majority of Americans surely share — Trump tried to bluff his way through the interview, eventually mangling Kurds with Quds and generally coming off as unimpressive.

Whereas Trump bulldozes through criticisms with bluster, Clinton evades scrutiny of her misdeeds by maintaining the contradictory fictions that she accepts full responsibility and also has already answered all of the relevant questions honestly, thank you very much.

Speaking of Aleppo, we finally have the first clean post-gaffe national presidential poll, from Reuters/Ipsos. Results? No change from the week before, tied his all-time high at 8 percent.