LAPD Honors Officers Who Didn't Use Deadly Force, Much to the Police Union's Dismay 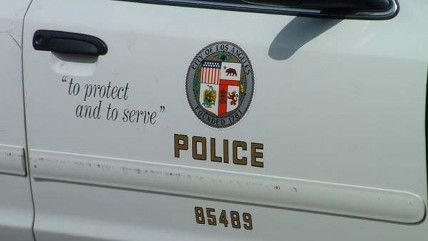 The LAPD bestowed its newly created "Preservation of Life Award" — recognizing officers who take exceptional care to successfully de-escalate dangerous situations and avoid using deadly force — on 25 officers at its annual "Above and Beyond" gala last Thursday night. The new honor is considered to be at the same level of prestige as the department's highest honor — the Medal of Valor.

One of the honorees, Officer Danielle Lopez, confronted a man who she believed was pointing an assault rifle at passing cars. Lopez and her partner were able to convince the man to drop his gun and arrest him without violence. It turns out the gun was fake.

Another recipient of the Preservation of Life medal, Officer Ericandrew Avendano, encountered an ax-wielding man he suspected was suffering from mental illness or was high on drugs. Avendano spoke with the man and contained the situation peacefully before backup arrived to assist in subduing the man without shooting him.

Police departments in Camden (N.J.) and Philadelphia each have their own version of the award, according to the Los Angeles Times, but the LAPD's union — the Los Angeles Police Protective League (LAPPL) — thinks the award is a "terrible idea" which will "will prioritize the lives of suspected criminals over the lives of LAPD officers, and goes against the core foundation of an officer's training."

In a blog post reacting to the award's creation last November, the LAPPL Board of Directors wrote:

We recognize the Chief's intentions, however, the reality is the "Preservation of Life" award announced Tuesday by Chief Beck is ill-conceived and in actuality has dangerous implications. Incentivizing officers for "preservation of life" suggests somehow that this is not what they train hard to do. It suggests that officers must go above and beyond their normal activities to avoid harm; or put another way, that officers will be penalized for resorting to an appropriate, lawful use of force. That is ludicrous. The last thing an LAPD officer wants to do is to harm, or worse yet, take the life of a suspect.

It's not just the honoring of the successful deployment of de-escalation techniques that the union has a problem with, it's the training of such techniques at all. Earlier this year, I wrote about the LAPPL's opposition to the LAPD Police Commission's recommendation for new "use-of-force policies that emphasize de-escalation and the use of minimal force in encounters with the public."

Union Director James McBride addressed the Commission at the time, warning that if an officer were to die because the new use-of-force policies caused him/her to hesitate, "there will be blood on your hands." I also noted:

Union President Craig Lally, once named a "problem officer" in a blue-ribbon panel's report on "the problem of excessive force in the LAPD" following the 1991 beating of Rodney King, said the new policies create a "no-win situation for the officer."

Lally added that if faced with a potentially violent situation, "The best way to de-escalate is to run away."