Rudy Giuliani Says "Anything is Legal" in War, Including Taking Iraq's Oil 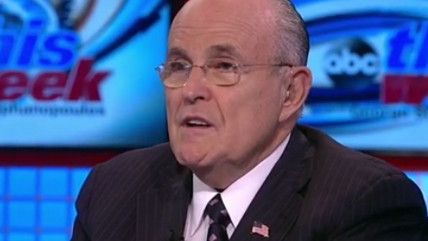 Former New York City Mayor Rudy Giuliani, appearing on ABC's The Week this morning, told host George Stephanopoulos that Donald Trump's repeated assertion that the U.S. should have taken Iraq's oil following the 2003 invasion would have been legal, because "It's war…until the war is over, anything is legal."

Giuliani insisted the Republican presidential nominee was not talking about stealing Iraq's natural resources to benefit U.S. financial interests, but to keep the oil out of the hands of groups like ISIS "and distribute it in a proper way."

The former mayor, who for a while was dubbed "America's Mayor" for his handling of media relations during the chaotic days after 9/11 and was an early front-runner for the 2008 GOP nomination, appears to be oblivious of the many international treaties, conventions, and laws that prohibit the pillaging of private property in occupied countries.

Much like Donald Trump's insistence that the military would not refuse his orders to torture captives or bomb the families of suspected terrorists, Giuliani's ignorance of the concept of war crimes should be the kind of statement that "disqualifies" someone to be president, but this is 2016, where not immediately recognizing the name of a city in Syria gets you awarded the "Worst Week in Washington" by Beltway pundits.

Watch Giuliani's exchange on The Week below:

Giuliani: "Of course" taking Iraq's oil would have been legal: "Until the war is over, anything is legal." #ThisWeek https://t.co/VR7lvCJAws