Regardless of Aleppo, Gary Johnson Is Only Candidate Talking Spending Cuts and Foreign-Policy Restraint

Wash Post op-ed lays out strong case for a president not beholden to either Dems or GOP. 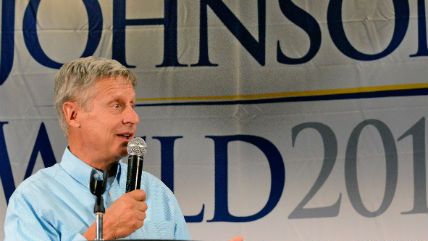 Before the Great Aleppo Gaffe (GAG) this morning on MSNBC's Morning Joe, Libertarian Party presidential candidate Gary Johnson must have thought this was going to be a pretty fine day for his campaign.

In fact, he's got an op-ed in The Washington Post that makes an unusual and pretty convincing case that he and his running mate, former Massachusetts Gov. Bill Weld, are exactly what the country needs to break free of the partisan-spending stupor. While gridlock can be a good thing—do we really want the government to be super-active?—the plain fact is that 70 percent of federal spending is already on autopilot. So-called mandatory spending on Social Security, Medicare, Medicaid, and more, along with interest on the national debt, happens whether Congress lifts a finger or not. Since 1970, the share of automatic spending has risen from 39 percent of the federal budget to 68 percent. According to the Peter G. Peterson Foundation, which advocates for less spending, by 2046, mandatory spending and interest on the debt will crack 80 percent of the federal budget.

What the hell is going on? Back in 1970, Medicare and Medicaid had yet to kick into high gear and Social Security spending was still fairly restrained. Since then, as especially in the 21st century, Congress and president after president (that is, George W. Bush and Barack Obama) have seen fit to push more and more spending into the "mandatory" category because then they don't have to take responsibility for it. The beneficiaries of entitlements, especially seniors, are big voters and aren't complaining. Younger Americans (generously defined as anyone younger than myself) are slow to call foul on olds who, we are constantly told, are just one means-testing law away from eating cat food and paying a billion dollars for basic medical care. But we're rapidly approaching a point where virtually all spending is already spoken for. If and when interest rates rise toward their historical average, the squeeze will be even tighter.

Johnson's Post op-ed addresses this budget problem directly. "Elected officials in Washington cannot even agree on a real budget — and haven't for years. That's their most straightforward responsibility," he writes.

The first priority of the Johnson-Weld administration will be submitting to Congress a balanced budget. As governors, we held true to promising that taxes would go down, not up. We'll end up cutting spending by roughly 20 percent in order to match it to current tax receipts.

My default is to question federal spending and to require every year that each agency justify its budget anew. As governor, I vetoed more than 750 bills, often special-interest payoffs, and I won't hesitate to veto such bills from Congress.

That said, Bill and I are reasonable and realistic executives. We will accomplish the free-market, fiscally conservative agenda of limiting government and increasing trade, while pursuing long-overdue immigration and criminal-justice reform.

Johnson argues that precisely because he is outside of either the Republican or Democratic Parties that he will be in a better position to pull people to the table and hammer out legislation that shrinks the size, scope, and spending of government. That's not because he is a deal-maker a la Donald Trump. It's because, he notes, a plurality of Americans (38 percent, according to Gallup's most recent survey) consider themselves independent and want "a common-sense approach that combines fiscal discipline with social inclusion."

The former two-term governor of New Mexico's op-ed is well worth reading.

So is his actual comments on Syria, which have been almost totally lost in the gotcha-ism of Johnson's GAG. Where Hillary Clinton has a clear record of pushing for military intervention—she voted for the Iraq War and was slow to acknowledge it was failing and she was one of the chief voices in the Obama administration pushing for bombing Libya, among other things—and Donald Trump talks about "bombing the shit out" of ISIS, Johnson has been consistently non-interventionist. Here's how his appearance on Morning Joe wrapped up:

"You asked 'what is Aleppo?' Do you think that foreign policy is so insignificant that somebody running for president of the United States shouldn't even know what Aleppo is, where Aleppo is, why Aleppo is so important?" [host Joe] Scarborough asked.

Imagine that. A presidential candidate who wants to restrain spending and foreign interventions. What a clown, right?