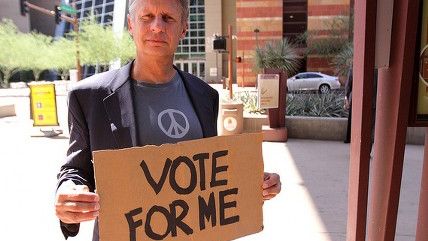 Interviewer Mike Barnicle asked Johnson what he would do about Aleppo if elected President. Johnson replied, "And what is Aleppo?" Barnicle, aghast, remarked "You're kidding," before informing the man currently polling in third place to be commander in chief of the most powerful military in the history of the world that Aleppo is the epicenter of the Syrian refugee crisis.

Watch the full exchange below:

This is a serious blunder by Johnson, who has said he will be slower to intervene militarily abroad than Hillary Clinton and that Donald Trump's promise to "bomb the shit out of ISIS" is uninformed policy. Johnson has pushed the idea that libertarians are not isolationists, but that there are better ways to help with situations such as Syria than sending U.S. troops, arming unvetted rebels, or using extralegal drone strikes which inevitably kill civilians.

Johnson's Aleppo gaffe gives ammunition to those who think Libertarians are inherently unserious (especially about defense and foreign policy) and a pointless distraction from the two major-party candidates. Morning Joe host Joe Scarborough concluded today's show by remarking that Johnson's gaffe rendered him "unqualified to be president of the United States." Barnicle added that Johnson expressed "an appalling lack of knowledge."

Following the segment, Johnson ran into MSNBC's Mark Halperin in the lobby of the NBC studios, who told the Libertarian candidate that his segment "is going to be a big flap, I promise you. It already is." Johnson admitted, "I'm incredibly frustrated with myself."

And yet Johnson is hardly alone when it comes to Syria gaffes. Former Obama administration ambassador to Iraq, Chris Hill, followed Johnson on Morning Joe and mocked the former New Mexico governor's "blank stare." Hill predicted that "he will now be known as 'Aleppo Johnson'" and then called Aleppo "the capital of ISIS." In fact, Raqqa, not Aleppo, is widely considered the capital of the self-declared caliphate known as the Islamic State. The New York Times incorrectly referred to Aleppo as "the capital" of ISIS three times in its quick take on Johnson's screw-up before adding a correction to the bottom of the page. Even that correction required a correction, as it initially referred to Aleppo as Syria's capital, when it is in fact, Damascus.

Foreign-policy misstatements actually are a staple of presidential elections. In 1999, George W. Bush scored 25 percent on a foreign policy quiz given to him by an NBC affiliate. He was unable to name the presidents of India, Pakistan, Chechnya, as well as the foreign minister of Mexico. During a 1976 debate with Jimmy Carter, Gerald Ford insisted that "there is no Soviet domination of eastern Europe." Just last night in a forum about veterans issues and foreign policy to which Johnson was not invited, former Secretary of State Hillary Clinton appeared not to know that Libya is in a state of civil war. That the war is a result of the power vacuum created by the military intervention she aggressively pushed for while serving in Obama's cabinet makes her oversight particularly distressing.

None of these examples of past campaign gaffes excuses Johnson's "blank stare" when asked about Aleppo. He and his running mate and the Libertarian Party have been insisting that they belong on the main debate stage, where they would prove both that their ideas are viable and their ability to effectively govern is based on sound footing. Choking on a simple question about what he would do about the refugee crisis by not knowing a major Syrian city is a completely fair mistake for which to hold Johnson accountable.

But does it really serve as an unforgivable disqualifier, especially considering everyone from Hillary Clinton to Obama's former Iraq ambassador to The New York Times is clearly capable of fumbling important details at any given moment? Or is this just the excuse establishment media and staunch defenders of the two-party duopoly were waiting for to finally dismiss the highest-polling third party candidacy in 20 years? Virtually all signs point to the latter.