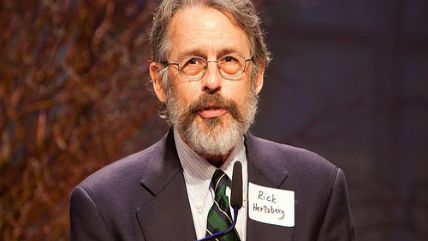 It takes genuine effort to cut through the clutter of Twitter-stupid this election cycle, so let's all give a vigorous golf clap to New Yorker staff writer and former Jimmy Carter speechwriter Hendrik Hertzberg for not just straining a sports metaphor, but snapping it in half and feeding the remains to coyotes:

So, having the Commission on Presidential Debates—which was founded three decades ago as a joint operation by the Republican and Democratic parties, in a move that the League of Women Voters described at the time as the perpetuation of a "fraud on the American voter" and "the hoodwinking of the American public"—allow any candidate receiving less than 15 percent in national polls (strike that, less than "at least 20" percent, Hertzberg now says) into a debate would be like, er, cheating in a marathon? He must mean that special kind of marathon, where there are only two runners, each representing a team that automatically qualifies, and the rules for any would-be outside entrants are written by the insiders' coaching staffs. Leading many of Hertzberg's colleagues in the elite media to conclude that the competition is "rigged."

Hertzberg's Twitter feed, which reads (appropriately enough) like a pool report from inside the pro-Hillary Clinton media tank (sample: ".@WIRED's pro-HRC editorial is thoughtful, calm, and curiously reassuring"), is filled with plenty of such comical third-party sports metaphors. "A US general election," he informed us Aug. 2, "is not like a horserace. It's one-on-one, like an NBA final, a Super Bowl, or a World Series." B-b-but, what if you play for the Federal (or Mexican!) League? Rub some tobacco spit on it, kid: "There were 17 GOP choices, 3 Dems. @DrJillStein shoulda made it 4. To make the Series you gotta win the pennant."

Well, at least he's just arguing that you can't win as a third-party candidate, which is almost always true (except when it is not); surely he's not gonna reach for that old trope about how a vote for X is a vote for….oh Christ.

Scientific fact: a vote for Jill Stein is a vote for Donald Trump. https://t.co/dw00YntMUM via @thinkprogress

This line of argument (I won't call it "thinking") presupposes that the individual franchise inherently belongs to a pre-existing bloc, which is a curious interpretation of democracy. It also contains no opt-out for when a voter's tribe nominates someone he or she finds untenable. What if the Democrat was Joe Lieberman? Or George Wallace? Too bad: Think Progress says we've got to stay at home.

Such tribalist, all-or-nothing habits are what produce a debacle like we'll have tonight, when a private organization not controlled by the self-dealers at Commission on Presidential Debates is holding a candidate forum that gratuitously excludes the man doing better than any third-party candidate since 1992. Unhappily for the Hendrik Hertzbergs of the world, the youngest generation of voters don't begin to understand these ancient loyalty oaths, and are also (not coincidentally) disproportionately supporting Gary Johnson.

Bonus Hertzbergania: That time after the 2012 election when he said that now his people might start treating President Barack Obama with skepticism: "He was the champion of our side, he vanquished the foe….. [but] now liberals don't have to worry about hurting his chances for re-election, so they can be tougher in urging him to do what he should be doing."