Pennsylvanians Will Have To Pay For Gov. Chris Christie's Bad Spending Habits

With $80 billion in pension debt and after handing out $1.5 billion in corporate welfare, Christie looks across the Delaware River for a bail-out. 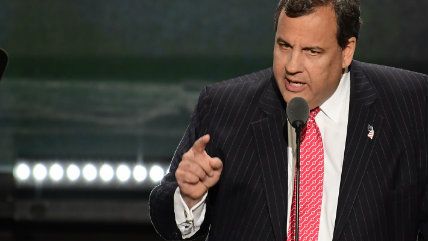 Starting next year, New Jersey will be taking a larger share of the fruits of their labor.

Christie announced on Friday that he will terminate a 39-year-long deal between the two states that allowed residents of Pennsylvania who work in New Jersey to pay The Keystone State's comparatively lower income tax rate. The change in policy affects about 125,000 Pennsylvanians—most of them in Philadelphia and the city's suburbs, according to the Associated Press.

Christie, a Republican, did not even try to hide the fact that he's ending the longstanding tax deal in order to pad his state's bottom line. The Christie administration hopes to collect $180 million annually by dumping the tax agreement with Pennsylvania (it was one of several tax reciprocal agreements that exist between states, like the one that allows workers in Washington, D.C., to pay taxes in whichever state they live).

"In the longer team, it's just one more example of New Jersey not having a welcoming tax environment," said Joseph D. Henchman, vice president of legal and state projects for the Tax Foundation, a nonpartisan think tank based in Washington, D.C.

At least the change won't drop New Jersey any further down the Tax Foundation's annual rankings of state tax climates. For 2016, it was already ranked dead last among the 50 states. Pennsylvania ranked a mediocre 32nd in the nation.

Pennsylvanians who are unhappy with their higher tax bills can perhaps find solace in the fact that they will be helping to pay for the retirements of New Jersey state workers and to close a budget gap created by years of questionable spending on corporate welfare.

That's because—despite Christie's claims that he needs more revenue to balance the budget—New Jersey remains a classic example of a state with a spending problem, not a revenue problem. On a per capita basis, only five states collected more revenue in 2013 than New Jersey's state and local governments did (two of them are Alaska and North Dakota, where tiny populations and a reliance on oil and natural gas excise taxes skew per capita measurements like this).

Meanwhile, spending has increased almost every year during Christie's administration: the state spent $29 billion in 2010 when he took over the governorship but the budget Christie signed in July spends $34.5 billion.

Christie blames the spending increases on the state's escalating pension costs. New Jersey's unfunded pension obligations total more than $80 billion, and mandatory state bond disclosures say the two main retirement funds could be completely out of money by the mid-2020s.

To be fair, New Jersey's pension crisis predates Christie's time in office—and it will still exist when he departs. Still, Christie shares in the blame for failing to bring those problems under control. In 2011, Christie reached a deal with Democratic lawmakers that would have curtailed state spending in favor of increasing contributions to the pension system (state employees would have to pay more into the system too). In theory, the deal could have closed the unfunded pension gap within a decade.

In reality, Christie couldn't follow through. Facing political pressure and revenue shortfalls, the governor reduced pension contributions in favor of spending that money in other places.

One of Christie's favorite ways to spend money is by handing out tax breaks to some of his state's biggest businesses.

In his first two years in office, Christie approved $1.57 billion in tax breaks for dozens of companies, the New York Times reported in 2012.

Panasonic got $102.4 million in tax credits to move into a shiny new headquarters—just nine miles down the road from its old headquarters, which was also in New Jersey. Goya Foods received $81.9 million from the state to build offices and a warehouse in Jersey City, and Prudential Insurance was handed $250 million in tax breaks to move from the Newark suburbs to the city's downtown. Those tax breaks, and more, were part of Christie's Urban Transit Hub Tax Credit Program, which sought to move businesses into some of New Jersey's struggling urban cores and help the state regain jobs after the recession.

In most cases, those subsidies weren't creating new jobs. They weren't even poaching jobs from other states. They were just shuffling jobs around inside New Jersey In some cases jobs were lost, like when Campbell's Soup got a $42 million tax break from the state to renovate its Camden offices. When Campbell's announced a year later that it was eliminating 130 jobs, the Christie administration was so furious that it allowed Campbell's to keep $34 million of the initial tax break, the Times reported.

Still, maybe the worst financial boondoggle of the Christie administration (even worse than spending $300,000 on food and booze out of his taxpayer-funded expense account) was the $200 million he tossed at a new shopping mall being built near the Meadowlands sports complex. After construction on the Xanadu mall stalled during the recession, Christie kicked in tax money to get it started again in 2011. Today, the mall is still unfinished, but maybe it'll be ready for a ribbon-cutting before the very concept of a shopping mall is relegated to the history books.

Handing out billions in tax breaks and corporate welfare was always going to be bad for New Jersey's bottom line.

"Giving away future tax revenues is no better than giving away today's," wrote Nicole Gelinas, a contributing editor at the Manhattan Institute, in 2011 when Christie signed off on spending $200 million for the Xanadu mall project. "Voters wouldn't like it if Christie took $200 million out of this year's budget to give to real-estate developers. Structured tax-supported financing is the same thing, in disguise, and pushes bigger deficits onto future governors' watches."

Not just onto future governors' watches, it turns out, but onto residents of other states too. After years of bad fiscal decisions, Pennsylvanians will have to help bail out New Jersey.