Military Members Are Into Gary Johnson, But NBC Won't Let Him Near Tonight's Forum

Clinton and Trump's unfavorables are higher among veterans than the general public, but they'll be featured at at tonight's IAVA event. 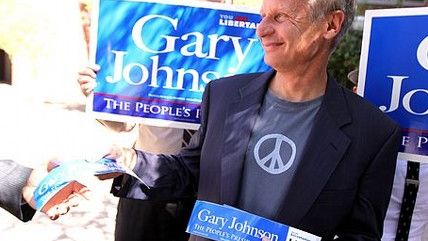 The first-ever forum devoted to presidential candidates addressing veterans and military-related issues takes place tonight aboard the USS Intrepid, a retired aircraft carrier that now serves as a permanently-docked military museum in the Hudson River along midtown Manhattan.

Hosted by Iraq and Afghanistan Veterans of America (IAVA) and set to be broadcast on both NBC and MSNBC at 8p ET tonight, the Commander in Chief forum will be moderated by Today co-anchor Matt Lauer, who will direct questions to Republican presidential nominee Donald Trump and Democratic presidential nominee Hillary Clinton before an audience mostly consisting of military veterans.

As I noted here at Reason shortly after the forum was announced in late August, Libertarian candidate Gary Johnson was not invited to participate, despite polling as high as high as 38.7 percent in a recent non-scientific survey of about 3,500 active military members conducted by Doctrine Man.

Another non-scientific survey of about 1,900 active military members, conducted in July by Military Times and cited by IAVA founder and CEO Paul Rieckhoff on Twitter, puts Johnson at a distant third with about 13 percent, behind Clinton's 20 percent and Trump's 49 percent support. Military Times noted that "It's unclear just how popular the Libertarian is among current troops and veterans," but that their poll is "representative of more senior and career-oriented troops, the men and women who run the military's day-to-day operations and carry out its policies."

Still, this same poll which is being used as evidence that Johnson's presence at the IAVA forum would somehow not be of interest to veterans because the two major party candidates are just fine, indicates that 23 percent intend to vote for a third party or write-in candidate (that's three percentage points higher than those who intend to vote for Clinton) and that 61 percent of those polled are "dissatisfied" with Trump as the GOP nominee. For Clinton, the dissatisfaction index goes up to over 82 percent. It's worth noting that among the general voting population, Trump's unfavorables rate at about 55 percent, with Clinton's at about 52 percent.

NBC (which apparently had the final say in the decision) and IAVA have faced a pretty loud backlash from pro-Johnson veterans (as well as those not committed to voting for the Libertarian candidate, but think his presence in major presidential forums would be a welcome addition). Some of these veterans have swarmed on IAVA's Facebook page to leave negative reviews and comments. Of the more than 17,000 reviews on IAVA's page, over 13,000 were the lowest "1 star" rating.

The veterans group has reportedly since reached out to both Johnson's campaign and Green Party candidate Jill Stein's, and has invited both third party candidates to participate in an additional televised IAVA Commander in Chief forum, albeit one that will surely not draw as many viewers or media attention.

Johnson's campaign communications director Joe Hunter told Military Times that Johnson did not feel slighted by the process, and "applauded the work of IAVA and other leading (veterans groups) in America who are giving voice to the nation's veterans." Hunter added that "IAVA is a private organization and it is not for us to try to dictate what they do," and that regarding some of the more aggressive social media protesting by pro-Johnson military members, "we are not encouraging our supporters to harass anyone. We don't do that."

Clearly, the rancor over Johnson's exclusion from the main forum has caused some consternation for IAVA. Rieckhoff took to his personal Facebook page last week to write, "Lots of people claiming to represent Gov Gary Johnson have baselessly and nastily attacked me and IAVA this week," adding that he had a "great chat" with Johnson, before lamenting "haters gonna hate. And trolls gonna troll."

Also last week, Rieckhoff told The Hill, "Mr. Johnson still does not meet the historical standard for general election meetings between candidates set by the Presidential Debate Commission" and noted "IAVA also believes we have a responsibility to inform our members that, as of today, neither Gov. Johnson nor Dr. Stein has even posted a veterans policy section on their website." The "historical standard" Rieckhoff refers to is a mere 16 years old (and was implemented as a direct reaction to Ross Perot's unarguably effective third party run in 1992), but his comment about the lack of a veterans section on Johnson's campaign website appears to have has some effect, as the Libertarian now has a policy page devoting strictly to veterans' issues.

Though the Johnson campaign and IAVA have decided to play nice on this issue, Libertarian Party (LP) chair Nicholas Sarwark told Reason in a phone interview today that the LP's position is that as long as IAVA plans to be a "debate-sponsoring organization," the group is required to comply with the same Federal Election Commission (FEC) rules pertaining to "having objective pre-established criteria if they want to remain a non-profit and non-partisan." Sarwark added that if IAVA wants to provide "campaign contributions to Republicans and Democrats by offering them a stage and excluding the Libertarian Party candidate, that's fine, but they have to figure out how to re-organize where they can continue going forward without a tax exemption."

Sarwark says he gave the Johnson campaign "a head's up" that the LP didn't think the "separate but equal" invitation for Johnson to participate in another veterans forum was "acceptable or legal," nor does he think what he describes as an "after the fact, half-assed rationalization" by IAVA sets a good precedent. Filing a complaint with the FEC over what he describes as IAVA "engaging in partisan behavior while claiming to be non-partisan" is something the LP is considering, according to Sarwark.

Some pro-Johnson veterans are planning on live-tweeting the forum using the Twitter hashtag #MilitaryVotesMatter, and some planned protests are being scheduled to take place outside tonight's forum, which Reason will be on hand to report.

When reached for comment, IAVA directed Reason to its press releases and Rieckhoff's Military Times interview. This post will be updated if we receive a further response.