Honestly, the Only Way To Avoid Saying Microagressions Is To STFU Already

Clark University's handy-dandy guide to not insulting everyone you're likely to meet as a new college student (freshman is a bad word). 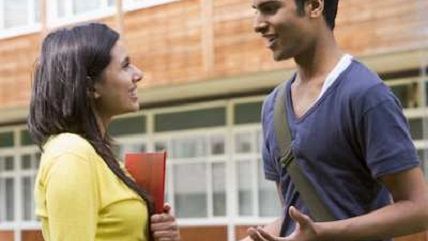 When you're done scrubbing your Twitter, Facebook, and other social media of inherently racist Harambe-the-Dead-Gorilla memes, you'll want to check out the latest list of "microaggressions," best defined as insults so meager that even the popularizer of the concept has said universities have distorted the meaning of his term.

So here's The New York Times with a helpful list of examples, courtesy of Massachusetts' Clark University:

A sampling of language and behaviors called "microaggressions," provided to Clark University students, that universities are urging students to avoid.

Here's how the Times sets the scene at a Clark freshmen orientation section:

A freshman tentatively raises her hand and takes the microphone. "I'm really scared to ask this," she begins. "When I, as a white female, listen to music that uses the N word, and I'm in the car, or, especially when I'm with all white friends, is it O.K. to sing along?" The answer, from Sheree Marlowe, the new chief diversity officer at Clark University, is an unequivocal "no." The exchange was included in Ms. Marlowe's presentation to recently arriving first-year students focusing on subtle "microaggressions," part of a new campus vocabulary that also includes "safe spaces" and "trigger warnings."

Let's stipulate that there are serious problems with systemic racism in this country (indeed, Reason talks a lot about how discrimination affects policy areas such as education, drug policy, and criminal-justice reform). But let's also acknowledge that there is a serious problem with conflating actual racial bias with "subtle cultural insensitivity," especially when the latter leads to a cult of perpetual grievance that threatens intellectual and academic freedom. More from the Times:

The push to respond to complaints about subtle cultural insensitivity, as well as more overt racist behavior, continues on campuses across the country. About 75 chief diversity officers have been hired by colleges and universities in the past 18 months, according to Dr. Ervin's organization. Ms. Marlowe, a lawyer who most recently was diversity officer at the University of California, Santa Cruz, was also recruited by two other colleges this year before settling at Clark, a manicured campus of about 3,000 students an hour west of Boston in this heavily working-class city. Her two-hour presentation on Aug. 27 aimed to help students identify microaggressions and to teach them how to intervene when they observe one. Microaggressions can be verbal, nonverbal or environmental, she said. "What's an environmental microaggression?" Ms. Marlowe asked the auditorium of about 525 new students. She gave an example. "On your first day of class, you enter the chemistry building and all of the pictures on the wall are scientists who are white and male," she said. "If you're a female, or you just don't identify as a white male, that space automatically shows that you're not represented."

I have no interest in conservative defenses of, say, the American literary canon (the academic subject with which I'm most familiar with). In my grad school days, reactionary professors would claim that "women just didn't write things" back in the early 19th, or 18th, or whatever century. As often as not, that simply wasn't true. In colonial America (and 17th-century England, too), there were many important women writers who were subsequently ignored by later critics who just didn't give a fuck about anything that didn't fit a narrow, cramped definition of "great" literature.

At the same time, the example about a chemistry building given above, is dumb, isn't it? Does feeling comfortable or welcome have that much to do with the pictures on the wall about historically significant figures? And for god's sake, if women have always been equal in accomplishment to men, then why are we constantly celebrating our moral superiority to the past? And yet imagining a world that is still relentlessly hostile to everyone who is not "white and male" is no way to engender higher education, especially in a world that is more equal than ever (and especially at a school such as Clark, which is 58 percent female).

We do a disservice to current students if we tell them to think of themselves only in terms of how maltreated they are (even/especially when attending a college with a list price north of $40,000 a year). As important, we do a disservice to the women, blacks, and others in the past who bore the burden not of microaggressions but of macroaggressions.

How's this for a different mind-set, college freshmen?: Don't be obvious assholes to each other. Recognize you're all at college to learn new ideas, meet new people, and broaden your horizons. Everybody is at least a little bit nervous and out of his or her element. If something that someone says bothers you, bring it up and discuss it in good faith. Alas, some of the people you meet in college will be jerks and don't waste your time with them. But most of your classmates, like yourself, are just trying to figure out who they are and what they can be in this world. Any of us living in 21st century America are winners of the birth lottery; we are just so fricking lucky to be alive here and now compared to even 50 years ago. You've got that—and a thirst for knowledge—in common. It may not feel like it, but you're on the inside looking out. Build on that, and don't limit your reading to what's on the curriculum.